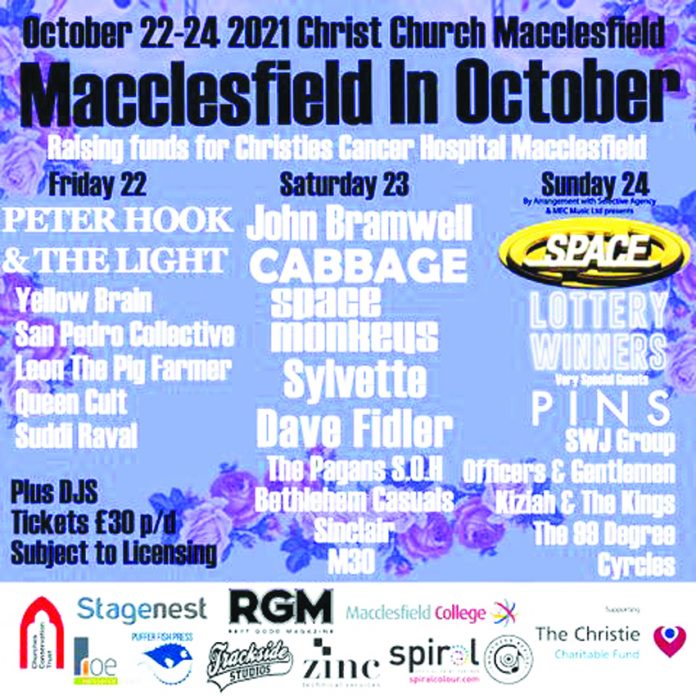 A fundraising festival for The Christie cancer unit at Macclesfield is taking place from 22nd to 24th October at the town’s Christ Church, featuring acts including Peter Hook and The Light and John Bramwell, as well as Space, Cabbage, Space Monkey, Lottery Winners, Pins and more.

In 2004, research was published in The Times naming Macclesfield and its borough the most uncultured town in Britain, based on its lack of theatres, cinemas and other cultural facilities. The festival is part of a new initiative to overcome this.

Christ Church is a redundant Anglican church on Great King Street, and was in use until 1981 with a stained glass window behind the stage.

The festival is a non-profit initiative working with The Christie, which is opening a centre at Macclesfield District General Hospital, which has been delayed due to covid.

Tickets are out now from £30: see skiddle.com and look for “Macclesfield in-October”.

Macclesfield has a long history of music: it was the home town of Ian Curtis and Stephen Morris, of Joy Division, and Gillian Gilbert, who along with Stephen Morris was a member of New Order. Other Macclesfield acts to have gained recognition include The Macc Lads and Marion. Silk Brass Band, the Macclesfield-based brass band, won the national champions of Great Britain title in 2003.