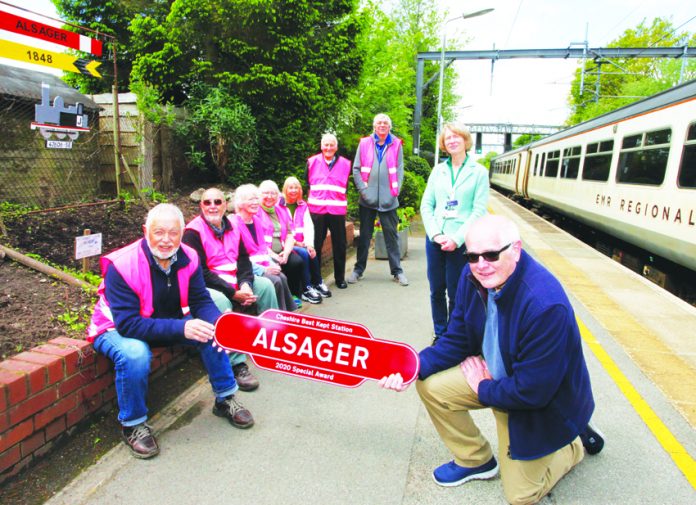 Recent achievements at Alsager Station were celebrated on Tuesday.

On the platform for the occasion were volunteers, councillors and East Midlands Railway staff.

Despite the pandemic, work has been continuing to improve station services for passengers.

New dementia friendly signage, a Cheshire Best Kept Station award and the return of the full East Midlands Railway service to the town after the hourly service was axed last year, were in the spotlight during Tuesday’s gathering.

It will make a real difference to rail passengers living with dementia.”

Alexa Stott, community rail ambassador from the rail company, said: “We have really appreciated the advice from Alsager Partnership on how to make their station more dementia friendly and now hope to roll out new signage at other selected stations in the future.”

Also celebrating was The Friends of Alsager Station group, which was awarded a special Cheshire Best Kept Station award for its contribution to the dementia friendly project and for ongoing work on the station’s extensive gardens. The gardens include areas of wildflowers, fruit trees and perennial shrubs, which are complemented by trough planters and baskets full of bulbs and bedding plants.

Claire Sandys, community rail officer, said: “The volunteers meet every Tuesday morning during the spring and summer months to maintain these beautiful gardens. They also help us to report faults and damage and have worked with schools to create artwork.”

Hourly service
On Sunday, East Midlands Railway reinstated its hourly service at Alsager Station, which had been temporarily reduced since September 2020.

The re-instatement was thanks in part to a campaign led by Alsager Town Council, North Staffs Rail User Group and North Staffs Community Rail Partnership.

While Alsager residents have regained their service between Crewe and Derby, they will also be able to use East Midlands Railway’s route extension to Nottingham and Newark Castle. In addition, a direct service to Stafford and Birmingham New Street with London Northwestern Railway will continue.