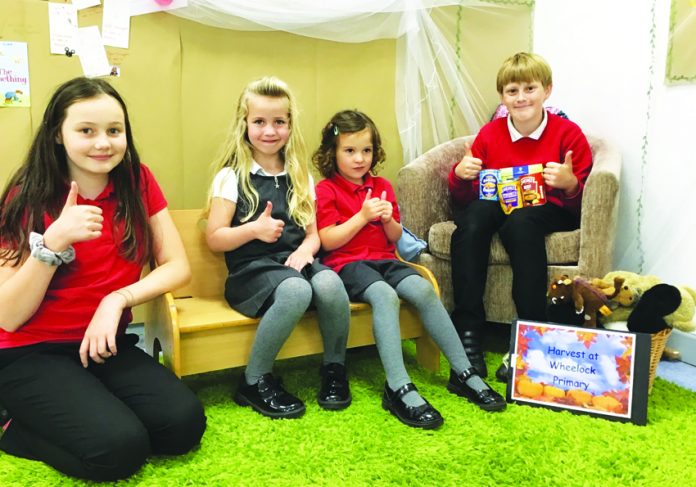 Children are coming to the aid of foodbanks this harvest time as they face mounting pressure.

The shortage of lorry drivers, which is putting strain on distribution networks, has led to some foodbanks warning they will have to shrink the size of parcels.

They are also anticipating a rise in demand following the £20 a week cut to universal credit.

As five schools that make up the Life Partnership Academy Trust, which include Daven Primary in Congleton and Wheelock Primary, celebrate harvest time, children are being encouraged to donate from home tins, packets and cartons of food, which will be given to local foodbanks.

David Marren, one of the academy’s trustees, said: “Most who attended a primary school in the UK when they grew up will be able to recollect their annual harvest festival, celebrated around harvest time.

“The five schools in the Learning for Life Partnership Academy Trust will be helping to keep the tradition alive and also ensuring that local food banks are benefitting from the many tins, packets and cartons that it collects.

“In the spirit of never missing an opportunity to learn, develop, collaborate and build friendships, the festival has morphed into a cross-school project with each school’s religious education coordinator helping steer the harvest festival project this term and mobilise the children to bring produce into school to share with their communities through their local foodbanks.”

Mr Marren said that as well as inspiring collaboration, the harvest project fitted well with the partnership’s values of “integrity, aspiration, respect and courage”.

After the schools’ harvest assemblies the food gifts will be delivered to the five foodbanks in Congleton, Sandbach, Nantwich, Shavington and Crewe.

“The harvest produce will provide a very welcome boost to the foodbanks in our area, as during lockdown, the foodbanks were very well supported by their local communities but recently the shelves have been emptying rapidly and there is now a shortage in basic commodities. The harvest initiative has already been well received,” said Mr Marren.

The foodbank in Sandbach has already sent a message of thanks to Wheelock Primary School for its donations of food.

James Bancroft, principal at Wistaston Church Lane Academy, asked: “If you are a parent or guardian of a child who attends one of our schools your support with this project would be very much appreciated.

“Could you please take your contributions to the school in the week beginning Monday 11th October?”

He added: “We know the foodbanks do a fantastic job in the community and we are so pleased to be able to focus on this forthcoming celebration and let the children see what a big difference they can make.”

The Government announced a £500m winter hardship fund last week but charities described it as a “temporary sticking plaster”.

Sabine Goodwin, network coordinator, said: “The Government is relying on food bank teams to cobble together reduced sized emergency parcels and local authorities to stretch paltry sums as they attempt to fill an ever widening gap.”