‘Hilarious’ Moth flutters in for run at the Alexandra Court 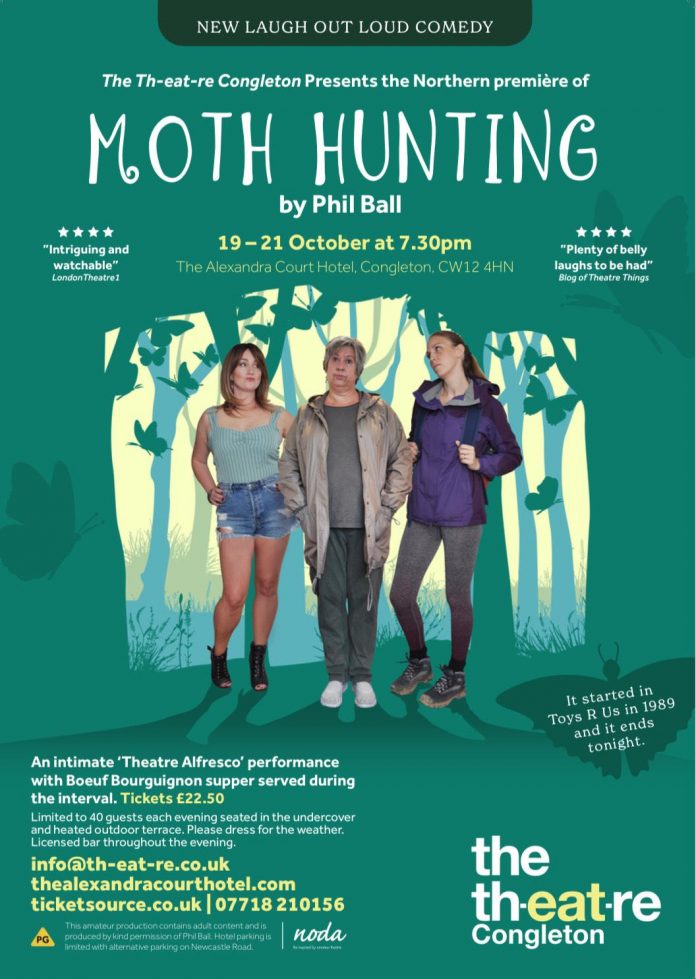 The Theatre, Congleton, has secured the rights to perform Moth Hunting, a “hilarious comedy”, staged in the town for its northern premiere.

It is the first full-length play from writer Phil Ball and a comedy that sums up the expression, “You can’t choose your family”.

Sisters Ann and Sue are about as different as two women can be, and their relationship is on decidedly shaky ground – despite the best efforts of their mum Gill to smooth things over.

When the three of them find themselves on a girls’ night “mothing” in the woods, tensions inevitably begin to boil over with hilarious consequences.

Returning to the stage, all from Now That The Lock Down Is Over, is the ever-popular and talented Janine Royle as Gill, while returning after her characterisation of Jane Smith is Laura Beech as Ann, with Kirsty Smith – the much-praised Liverpudlian waitress in Lockdown and who hadn’t acted for 20 years – with Alex Wilson (Harry in Lockdown) as Sue’s downtrodden husband Sid.

The comedy has adult themes.

The Theatre styles itself Th-eat-re and it will be another alfresco theatre evening with a beef bourguignon supper in the interval and waitress service for drinks. Tickets are £22.50 for the event at The Alexandra Court Hotel, Congleton (CW12 4HN).

As the weather is unpredictable in October, the play is undercover with heating, but audiences are asked to dress for the weather.

The play runs from 19th to 22nd October at 7.30pm, with the last date added due to demand. Tickets are available on TicketSource.