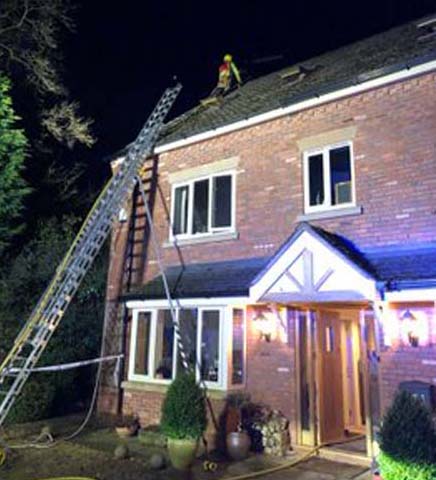 Firefighters were perched on the roof of a house on Monday evening as they tackled a chimney fire.

Advice has been issued about how to avoid such incidents following the blaze at an address in Newbold Astbury.

Crews from Congleton and Alsager were called to the property on Newcastle Road shortly before 7pm. On arrival they found a chimney well alight and causing heavy smoke logging.

Two firefighters, wearing breathing apparatus, entered the property and used a hose reel, specialist chimney rods and a hearth kit to tackle the fire from inside the building.

The crews also used a 13.5m ladder to examine the chimney from outside and a thermal imaging camera to check for hotspots.

Firefighters were at the address for around two hours.

Posting on its social media page after the incident, Alsager Fire Station said: “Ourselves and Congleton Fire Station have spent the evening dealing with a difficult chimney fire in Newbold Astbury. Firefighting tactics employed from both the hearth and the roof.”

It referred people to information on Cheshire Fire and Rescue Service’s website about how to avoid a chimney fire which said: “Make sure your chimney is clean before the colder winter months set in and you begin to use your fire and chimneys again.

“Fires can start accidentally in your chimney. Soot and fuel residues slowly build up in chimneys over time and sometimes these leftovers can catch fire. If this happens, the chimney could send burning soot into your living room or start fires within the roof space or on other floors of the house. Even if it doesn’t burn the house down, a chimney fire can cause a huge mess. You can help prevent this by having your chimney swept regularly.”

The fire service had the following chimney safety tips.
• Clean your chimney and flue regularly.
• Make sure embers are properly put out before you go to bed.
• Always use a fireguard to protect against flying sparks from hot embers.
• If the worst should happen, a smoke alarm can give you the extra time you need to escape a house fire.
• A blocked or defective chimney can cause both chimney fires and carbon monoxide poisonings so it’s very important to employ a professional qualified chimney sweep.

For further information and advice about how to avoid a chimney fire, visit cheshirefire.gov.uk and search for chimney fire safety tips.