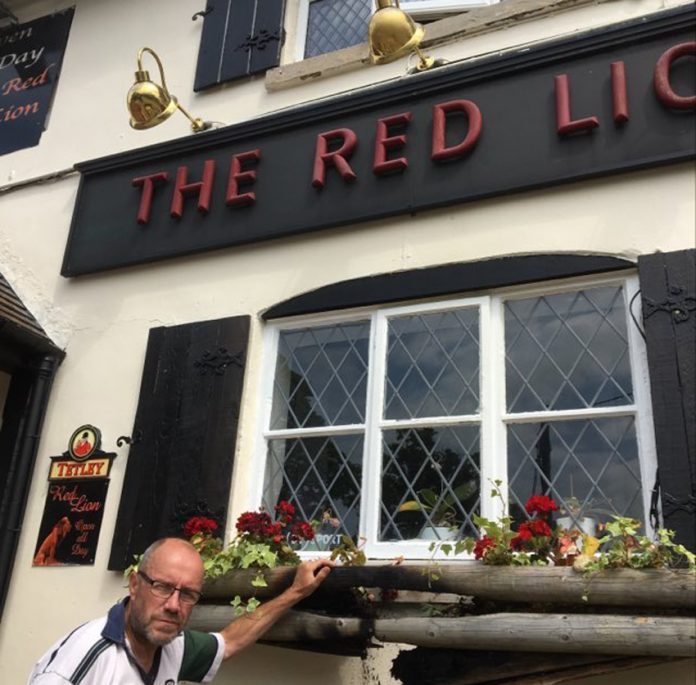 Publican Mike Garnett was saved from harm on Saturday when the passer-by alerted him as he slept in a room above a blazing window box (writes John Williams).

The incident happened shortly before 6am at the 18th century Red Lion, Goostrey, when the worker spotted the floral box was on fire and shouted up to the open window to rouse Mr Garnett.

Mr Garnett, (65), said he believed the box was not set on fire by accident and had been deliberately lit in an arson attack.

He said he woke to find his room filled with smoke and scrambled downstairs as the passer-by began putting the fire out with a hosepipe. The good samaritan left without giving his name as Mr Garnett took over putting out the flames.

“Late on Friday night the box was watered and there is no way it could have set on fire of its own accord,” said Mr Garnett.

“Someone must have put something flammable in it to make it go up as it did.”

He went on: “It was burning well, and smoke was coming into the bedroom when it was spotted, but we were able to put it out with the hosepipe.

“I was fortunate this guy came and woke me up or I could have been suffocated with the smoke, and I just feel thankful he saw the fire in time.

“It gave me a real shock and I would like to thank him, and certainly I will owe him a pint if he calls in the pub to see me.”

Mr Garnett’s wife Karen was away at the time, and he was alone at the premises.

The incident happened only a week after he and his wife celebrated their daughter Michaela’s wedding at the nearby St Luke’s Church followed by a reception at the Red Lion.

He added: “We had a good night in the pub, and I can’t believe anyone would be so stupid as to do this.

“Karen was shocked when I told her what had happened. I have reported it to the police as I suspect it was attempted arson and they have given me a crime number.”

Mr Garnett said he would like anyone with cctv locally to check their cameras to see if they had recorded anyone suspicious in the village in the early hours.

He also asks anyone who might have been passing the Red Lion between 5.30am and 6am on Saturday and saw something suspicious to contact the police at cheshire.police.uk and quote the incident number IML1045075 and occurrence number 21000515371.