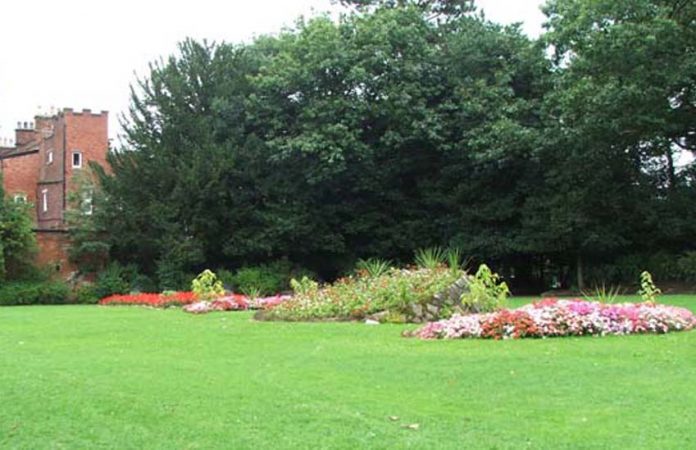 A campaigner who has helped to secure thousands of pounds in the past to improve Milton Park has condemned the latest plans for it.

Sylvia Dyke claimed the public realm proposal, which is currently out for consultation, will “sweep away the last vestige of Alsager’s identity” and the park will “suffer loss of trees, green open space and flexibility in its usage”.

Details of the plans, including almost 40 questions as part of the consultation, have been sent to homes throughout the town and a film about the proposals is available on Youtube.

The survey can be completed online but Mrs Dyke urged people not to rush into completing the survey and that they should “revisit areas mentioned for alleged improvement and judge for yourselves what will be left of the park and whether the highway proposals are feasible”.

As reported in the Chronicle last week, narrower roads, wider pavements, 20mph speed limits and a pavilion in Milton Park are just some of the plans, which if they come to fruition, could be introduced at a cost of £6m.

Mrs Dyke said she was particularly concerned about the future of the park.
The public realm scheme, included in Alsager’s neighbourhood plan, was drawn up by Xanthe Quayle Landscape Architects.

In the Milton Park area the aim is to open up the views and access, cutting back some of the vegetation and removing the Crewe Road bus stop to within the park area.

The formal “semi circle” gardens at that entrance would be re-landscaped for formal play while a “new and beautiful” multi-purpose pavilion in the park is planned to host events and performances.

There are also plans for a segregated direct pedestrian link from Sandbach Road South through the park.

Mr Dyke helped with the formation of the Milton Park Steering Group some years ago, which implemented four projects including the skate park and sunken garden, and secured £90,000 in funding over a three-year period.

She said: “I do not like the plans at all. It is going to completely alter the appearance of the park from St Mary’s Church on Crewe Road, they want to take out that semi-circle of grass close to the park entrance.

“The middle of the park is a green area but what is planned with a sculpture and a pavilion is going to make it difficult for multi-purpose use such as playing balls games or having a picnic. What’s left of the grassed area will be half of the size of what it is now.

“I am concerned about the land that’s going to be lost. Paths will be made wider, which will eat into green space.”

Mrs Dyke added: “They want a pavilion in the park; there will be nothing left of that green space and that’s what gives you the views through the park. There are a lot of trees and green space and use of the park will be lost.”

Referring to the roads she said: “As for the highways, honestly the main route through Alsager is a B road to start with and they are thinking of narrowing it.
“All in all, I just don’t think any part of it is going to work, especially the loss of trees and green open space, and the roads are going to be narrower.”

The public realm plan proposes that “some existing trees will be removed for better views of civic buildings and more effective space during events”.

Mrs Dyke said: “They want to take trees down so people can see the council buildings better. Well, you can see those buildings now. There’s a green space in front of the Civic so you can see that quite easily.

“The iconic picture for Alsager is the town centre with the cherry trees in bloom and it looks to me as if those cherry trees are set to disappear. This will completely alter the village atmosphere.

“The plans are not in keeping with the village and I believe that they will sweep away the last vestige of Alsager’s identity. Milton Park will suffer loss of trees, green open space and flexibility in its usage.”

Her message to the people of Alsager was: “I urge residents not to rush to complete the forms and not to depend on video images but to visit the areas themselves and judge what will be left of the park and whether the highways measures planned are feasible.”

The public realm plans also include zebra crossings on Crewe Road and Lawton Road while carriageways would by narrowed where appropriate to enable wider pavements.
There would be four “gateways” at the four main road entrances into Alsager – at Hall Drive, Shady Grove, Lodge Road and at the train station, with a 20mph speed limit within that area.

Some town councillors have welcomed the plans, as reported in last week’s edition, while there were support and objections on social media.

One post said the plans and consultation had “obviously been written by people who despise motorists and don’t seem to realise that Alsager is a large commuter town with few local services.

“90% of the proposals are anti-motorist. 20mph limits. Extra pedestrian crossings that are not needed.

“The congestion resulting could add 10 minutes to my commute out of Alsager to work in the morning. It will cause terrible air pollution, which will affect people with asthma. And imagine the endless months of roadworks and traffic lights whilst all this is put into place.”

The closing date for the online questionnaire is 31st May, 2021.

A physical consultation will take place as soon as covid-19 restrictions allow.

If anyone has any queries about completing the survey, they can email the town clerk at towncentre@alsagertowncouncil.gov.uk

The town council is hosting two virtual Zoom meetings in April to provide a further opportunity for people to hear more about the proposals. The meetings are on Tuesday, 13th April, at 10am and Wednesday, 28th April, at 6pm. People should email the town clerk to receive joining instructions.

To fill in the online survey, visit smartsurvey.co.uk/s/VisionForAlsager/