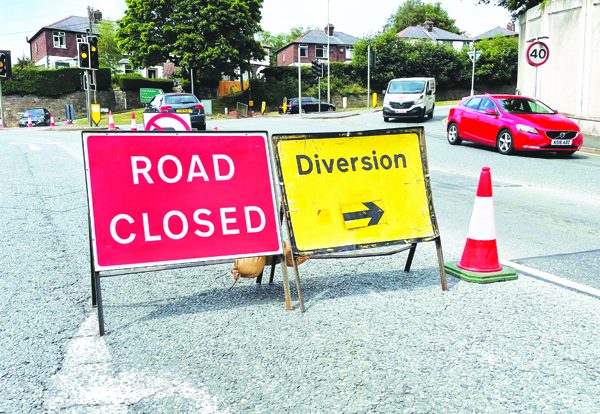 A busy road in Congleton that partially closed this week will remain shut for a month.

The traffic restriction, which prohibits left turns from Rood Hill onto Clayton Bypass, was put in place by Cheshire East Council to allow for works by utility company Cadent. The highways notice also applies to Clayton Bypass heading up to Rood Hill.

There was no sign of work on Monday afternoon as it came into effect, but vehicles were already queuing as far back as the roundabout that connects Rood Hill with Mountbatten Way.

The council notice allowed for 18 months of closures, but the authority said that it was “anticipated” that the works would be completed by Monday, 15th August. A sign at the junction with Clayton Bypass said that the measures would only be in place for 36 days.

An alternative route has been signposted, which takes drivers from Rood Hill, to Lower Heath and along Manchester Road, onto Macclesfield Road, then Wolstenholme Elmy Way before Holmes Chapel Road. The route continues onto West Road and Clayton Bypass, past the West Road roundabout.

Drivers heading for Tesco and Shell should go via West Street.