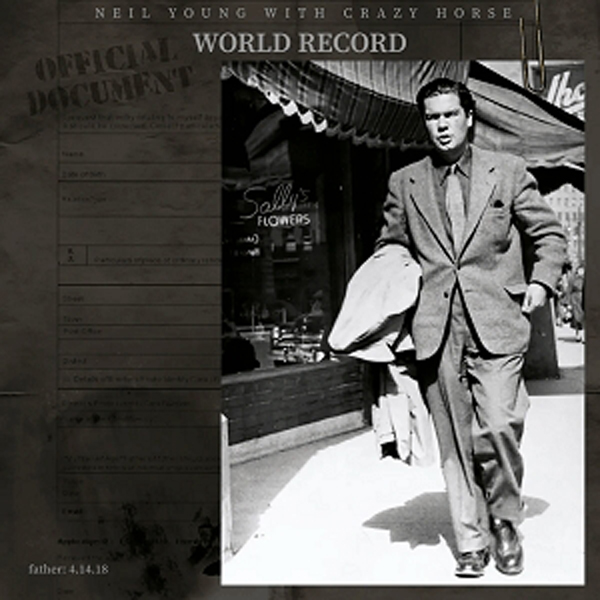 World Record is the seventh Young record this year and his 42nd career album but he apparently still has time for a stroll, the genesis of this one being walks with his dog while whistling a tune.

As the name suggests it’s about one of his recurring favourites, protecting the planet.

He’s roped in Rick Rubin on production, so you get Rubin’s trademark stripped-down sound, although Young himself his more than capable of such a move. It’s ramshackle and loose, Young more often on piano / pump organ or harmonica than guitar and the sound is one of a bunch of old friends kicking loose; Press reports say they recorded the songs live and in order. They’re maybe not Young’s best songs but he doesn’t play them like they are either, and it’s all pleasantly ramshackle.

You might wonder how a man so concerned about the planet can put out seven albums in a year, creating a biggish carbon footprint, and be a famed petrolhead. He addresses this very question in the closer, Chevrolet, the band now warmed up and ending the set (more or less) with a 15-minute monster about old cars, with Young burning electricity on his guitar and reflecting on how he can manage to love his old cars and still protect the planet: “Oh it feels so good / How will it comfort me / Burnin’ all that fuel again” – reassurance to all of us that the issue is not so clear cut or easy, and that Young realises he’s the last one to preach (not least because he’s made a three-sided vinyl album split over two CDs).

Chevrolet is a possible classic, the rest of the album has legs thanks to its shuffling, shambolic sound.