Neil Young and the Promise Of The Real: Noise and Flowers 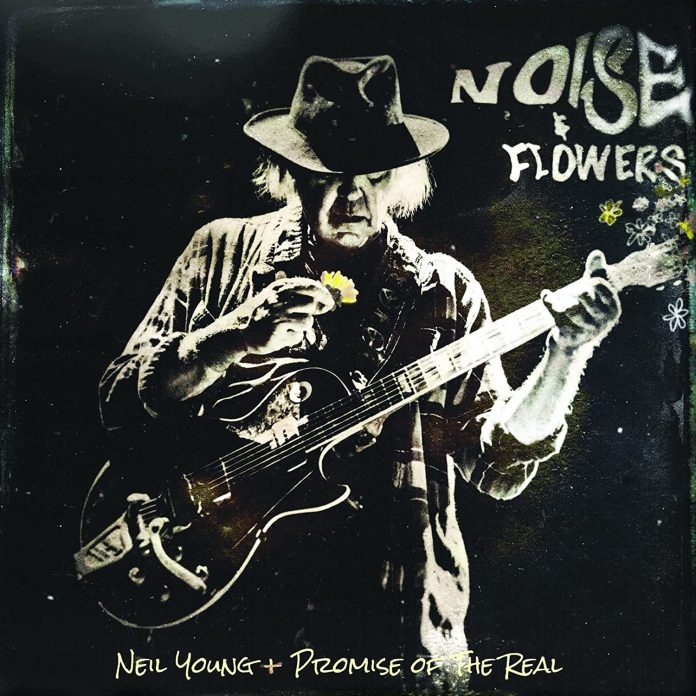 Young is churning out his archives at a prodigious rate, some of which are excellent, others for the completist only, as they say.

This one is great and if you’ve got a Neil Young fan in the fam, this is one gift you don’t have to worry about for Christmas.

The great thing about Young is that this could have been recorded at any time over several decades: Rockin’ in The Free World and F**kin’ Up tells you it must have been post the early 90s but there’s a lack of any Young monsters (Hurricane, Hey Hey, My My et al) which make it timeless; in fact, Noise and Flowers was recorded during the band’s 2019 European tour.
It’s a great album because it plays like a gig, and a gig you’re at. Last time we saw Young he did an acoustic half and an electric half, but this album just runs through his various transmogrifications.

It opens with Mr Soul, a 1967 tune that is a slightly soulless rock – the main riff is The Stones’ Can’t Get No Satisfaction – but it’s an excellent opener. Then comes the rock country Everybody Knows This Is Nowhere, and a stunning version of Helpless that segues into the country tune Field of Opportunity.

Alabama is next, the guitar doing that low note strummy thing he does before going all grunge; Alabama is not grungy but marks the start of a run of rockier tracks, kicking off with Throw Your Hatred Down (inclusion after Alabama purely coincidental), and a banger (10 minutes) of Rockin’ In The Free World. If you want loud Young, this is the moment; there’s even a drum solo.

After this he dials it down for more melodic fare, Comes a Time, From Hank to Hendrix, On the Beach (clocking in at seven minutes) and Are You Ready for the Country?
The show closes with a seven-minute cover of F**kin’ Up.

If Young was merely great, this would be the album to show it. The fact that many of his greatest songs are missing and it’s still a great album shows what a genius he is.