Pedestrians to be prioritised over drivers 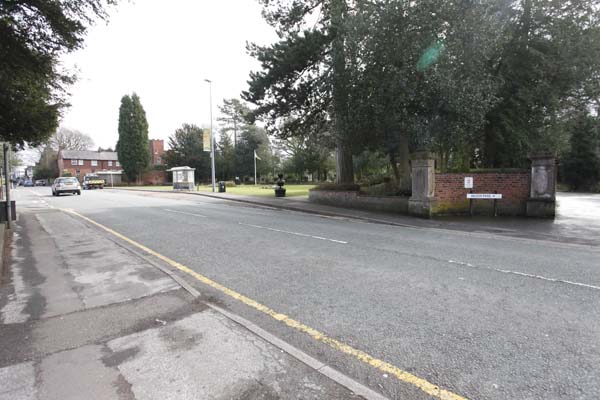 Narrower roads, wider pavements, 20mph speed limits, more zebra crossings, and a park pavilion are just some of the plans contained in a public realm strategy for Alsager that has gone out to public consultation.

The focus is on the future of town centre space in which pedestrians will be prioritised over drivers “to create a sense of space and improving the visitor experience”.

Alsager Town Council paid Slaithwaite-based Xanthe Quayle Landscape Architects to develop the public realm scheme in a project that has so far cost more than £15,000 and now the plans have been unveiled for the consultation.

The consultation document explains that the scheme overall has been costed at around £6m and bids for funding are expected to be made on the opportunities that become available as a result of the pandemic.

Participants are asked to answer almost 40 questions about the proposals.
Four “gateways” at the four main road entrances to Alsager would be introduced – at Hall Drive, Shady Grove, Lodge Road and the train station, with a 20mph speed limit within that area.

Carriageways will be narrowed where appropriate to enable wider pavements and roads and pavements will be resurfaced with “high quality natural materials reflecting the characteristics of the current built environment”.

The key objective is to “enhance walking routes and connectivity throughout the town including interfaces between street and open spaces and buildings.

There will be more pedestrian crossings in locations that connect different facilities and minimise crossing distances.

The existing signal crossing at Ashmore’s Lane would be maintained while there would be a zebra crossing “in association with gateway treatment” at Shady Grove.

The town centre environment will be enhanced by removing “superfluous street clutter using high quality street furniture and signage and using public art to celebrate the town’s skills, history and culture and to add human interest throughout the town centre”.

At West End, the key aim is to improve the Station Road/Church Road junction to prevent the acute left turn from Crewe Road into Station Road and instead reverse the one-way for Cross Street so cars can turn left along Cross Street to reach Station Road including turning right for the car park. Church Road would also be included in the 20mph zone.

It is also proposed to make The Avenue one-way southbound to promote the road as a sustainable walking route.

In the Milton Park area, the plan is to open up views and access to the park from the street, cutting back some of the vegetation and moving the bus stop to within the park area.

The formal gardens at the entrance would be re-landscaped for formal play. A “new and beautiful” multi-purpose pavilion in the park is planned to host events and performances and provide a meeting place.

There could be a parking ban in the park and no through access for Brookhouse Road to improve this as a walking route.

At Bank Corner and the Civic area, the boundary wall will be removed and replaced with sitting steps to allow access from all directions.

Some existing trees will be removed for better views of civic buildings and more effective use of the space during events.

There are plans to make it easier to walk from Milton Park to Fairview car park including enabling diagonal crossing of the road junction.

Access could be removed from the north side of Lawton Road to private car parks behind businesses and provide access instead from Fairview car park.

On Ashmore’s Lane the aim is to encourage its use as a walking route from the station and to also improve the setting of the war memorial. Again, the carriageway could be narrowed and the pavements widened.

There has been a mixed reaction by some to the proposals. On social media, there were concerns that the reduced speed limit and narrower carriageways would create a traffic bottleneck. Others supported some of the plans while there was a suggestion that the town needed a bypass.

Responding to the public realm plans, Lib Dem Coun Phil Williams said: I’m pretty much in favour, if the devil’s in the detail.

“I’m in favour of the scheme in relation to the junction of Station Road and Crewe Road, where the plan is to redirect traffic.

“I welcome plans for a pavilion in Milton Park and the plan to bring a bus stop into there is a bold move.”

He added: “I won’t be popular with motorists saying this, but having speed restrictions in the town centre will be fine and the scheme will sort out some of the road crossing issues.

“The only thing I would be worried about is if people will understand some of the points put forward which are written in a technical way but beyond that I’m very positive about it.

“It’s really bold and has come out of Alsager’s neighbourhood plan and I think it’s good to put forward a vision for people to look at.”

Coun Jane Smith, of the Animal Welfare Party, said: “In general, I’m very much in favour of it.

“Most of the points are really good. In particular I think it will allow adults, children, cyclists and vehicles to move around more safely and I think it will open up the town centre to what it should be – a vibrant, multi-space for all the generations.

“I think it will be something that will keep people in the town, which will be good not just for economic reasons but for environmental reasons as well. It will be a great thing for localism, too.”

Coun Smith added: “I do not want the removal of any trees. It’s a minority that would be removed, but we need trees.

“I think the plans will bring Alsager in line with similar sized towns and municipalities across Europe, which for many years have made the most of the space they have.

“In the coming decades we will need more shaded open spaces for people to stop and rest and relax.

“So I broadly welcome it and do hope that local people will see that it’s been designed with future generations in mind.”

She added: “Alsager Town Council has declared a climate emergency and this plan will help us have cleaner air in Alsager, which is fantastic. Cleaner air, slower traffic and benefits for cycling and pedestrians gets my vote.”

Labour town councillor Michael Unett said: “I think there are good points but there are things that need changing.

“I said to the working group set up about the public realm strategy that we would need to go out to consultation and then look at what people think.

“The essential thing is to gather these views to ensure residents have their say.

“Regardless of what the plans are, if they do go ahead they will have a big impact on everyone in the town so it is essential we have the views of local people.”

The closing date for the online questionnaire is 31st May, 2021. A physical consultation will take place as soon as covid-19 restrictions allow.

If anyone has any queries about completing the survey, they can email the town clerk at towncentre@alsagertowncouncil.gov.uk

The town council is hosting two virtual Zoom meetings in April to provide a further opportunity for people to hear more about the proposals. The meetings are on Tuesday, 13th April, at 10am and Wednesday, 28th April, at 6pm. People should email the town clerk to receive joining instructions.

To fill in the online survey, visit smartsurvey.co.uk/s/VisionForAlsager/