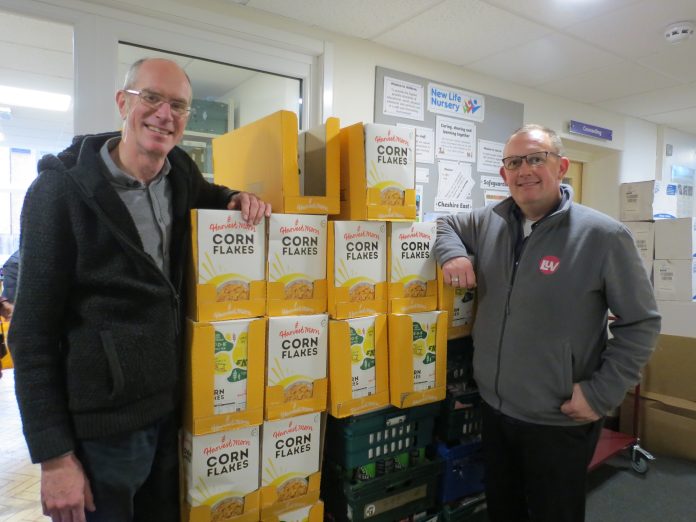 Demand at Congleton’s food bank reached an all-time high over Christmas, according to volunteers.

It is no longer uncommon for the Storehouse, based at New Life Church on West Road, to be delivering 200 food parcels a month to families in need, which is a much higher figure than it has been in previous years.

“It has become normal over the last year,” explained Jeff Cutts, who runs the operation.
“We’re seeing a lot more need than in previous years, but what’s astounding is that people’s generosity and donations have kept up with the demand.

“And it’s not just the businesses, churches and schools. There are some people who come in with a pallet full of donations, but other individuals come in with a couple of jams and a few hotdogs – and that is really appreciated, too. I think it really reflects well on the community.”

Among those who dug deep this Christmas was Lehvoss, a Congleton-based company that supplies materials such as plastics and paint to industries across the UK.

Managing director Ivan Pennington explained: “We decided as a team to help out the local community, so we spent £6,000 on food over the last four weeks to supply four full pallets of food to the food bank. We also wanted to help our own team out, so we gave £2,000 cost of living bonuses to all our staff.”

Donations such as Lehvoss’ are needed, as Mr Cutts explained that escalating financial pressures meant there were people using the food bank who may never have previously thought they would.

“The pressures with the increased cost of living and rising fuel bills means that more people are coming in and receiving something,” he said. “For many people, it might be a one-off thing and we always try to connect them with other agencies that might be able to help them.”