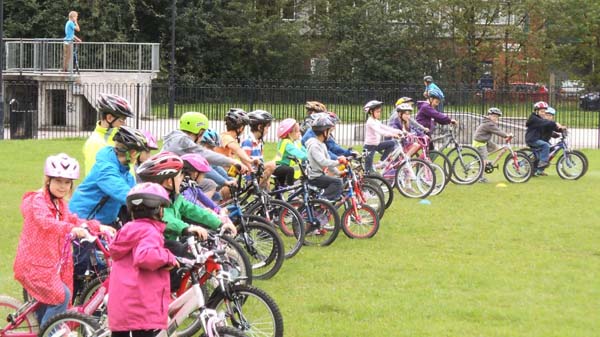 A series of cycle and scooter safety sessions are to be delivered in Alsager thanks to funding from police and crime commissioner David Keane – although social media users have questioned the scheme, saying it targets the wrong people.

Alsager School has teamed up with its local policing team and PCSO Kerrie Cummings to establish an after-school session, at which young people can learn how to refurbish their bikes and stay safe while cycling to and from school.

The scheme follows an increase in the number of collisions involving cyclists on Cheshire’s roads over the last two years.

The high school decided to submit a bid to Mr Keane’s Community Police Fund, which re-invests money into the community that has been seized from convicted criminals under the Proceeds of Crime Act.

The funding will support the delivery of cycle safety workshops with young people receiving tips from the local police team on how to stay safe while travelling to school.

The grant will also allow the school to open its doors to its design and technology suite afterschool, to enable young people to come together and develop new skills.

The money will help pay for replacement parts such as inner tubes, brake systems, lights and accessories. Alongside this, young people will work together to refurbish old bikes and restore them, which can then be sold to those less fortunate.

Mr Keane is up for re-election this year and has been more actively promoting his work this year, but his social media promotion of the sessions at Alsager attracted some negative comments.

Twitter users made comments such as: “The car drivers who are causing the problems don’t go to school”, “Number of Cheshire cyclist fatalities where bike maintenance was a factor”.

Cyclist Peter Smith said: “Don’t tell me, the thrust of their education will be about wearing hi-vis and helmets? It’s about time those in positions of influence started tackling the causes rather than victim blame. That means effective policing of appalling driving habits.”

Active Crewe commented: “We are still awaiting close-pass prosecution in Crewe. All the training in the world won’t protect children from dangerous drivers.”

Mr Keane said: “More and more young people are travelling to school on their bikes and scooters. Ensuring they are safe and roadworthy is of paramount importance.
“This project is the perfect combination of developing skills based on shared interests, but more importantly, sharing safety tips and advice to keep our young people safe on our roads.

“Sadly, our roads are not always safe for cyclists and many are killed or injured in the UK every year. One death or injury is one too many. By educating and supporting young people to be aware of the dangers, this could save a life.”