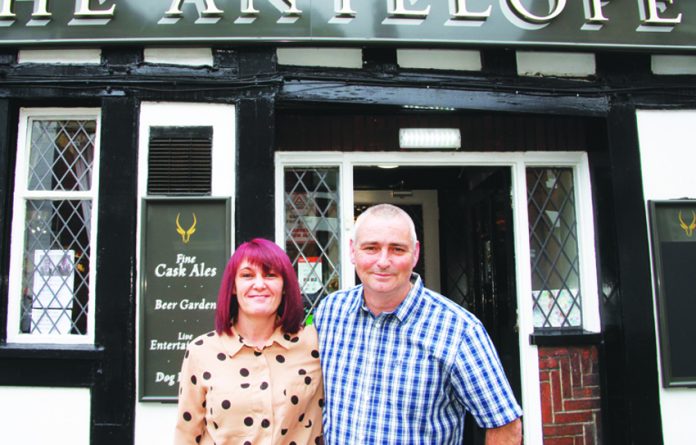 There were “smiles on customers’ faces” as new signs went up at a Congleton pub, marking a return to tradition.

The Beartown Cock, on Lawton Street, reverted to its original and rightful name The Antelope last week, to the delight of pubgoers.

The move has been planned for more than a year but was put on hold during the pandemic.

Landlady Dawn Luke has been running the pub with husband Mick for just over two years.
She explained: “We didn’t like the other name and a lot of customers liked it being called The Antelope – it meant a lot to them.

“We saw smiles on all of the customers’ faces as the new signs went up.”

In his book A Pub Crawl Through Time, Lyndon Murgatroyd said that the Antelope pub sign was popularly adopted as the White Hart and was the badge of Richard II. The heraldic sign has also been related to the dukes of Bedford or Gloucester and to Henrys IV, V, and VI. Numerous ships of the Royal Navy dating back to the 16th century have carried the name Antelope.

An 1875 town map showed the pub on site. In March 1911, the Chronicle reported the licence renewal of the Antelope discussed at Congleton Adjourned Brewster Sessions .

North Cheshire Brewery owned the pub, and owned 13 other houses in the town.

The most well-known landlord was the late John Burgham, licensee of the pub for 25 years and owner for his last 10 years at the pub. He retired in 1999 and sold the pub to Burtonwood, Warrington. In 2005, Burtonwood was acquired by Wolverhampton and Dudley. The pub was also owned by Chester pub operator Attwills, who renamed it the Beartown Cock, a name that had no local history and was also confusing, suggesting a link with the town’s Beartown Brewery.