Thieves who stole ‘heritage’ from historic church are jailed 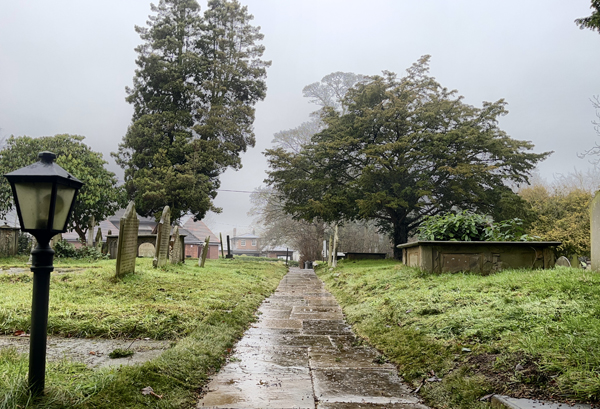 Three men have been sentenced after pleading guilty to stealing historic York stone from the path at St Mary’s Church in Astbury, and from the grounds of other churches in the North West and Staffordshire.

The path, now back in place, was closed for months after the theft, which happened under the cover of darkness in March. In the days that followed the rector of Smallwood, the Rev Anne Marie-Naylor, had said that while the cost to replace the valuable stone could run into five figures “it’s the fact that somebody would disturb what is a very tranquil people place”.

At Chester Crown Court last Wednesday Jason Perry, Connor Lipinski and Owen Lipinski were sentenced having previously admitted the conspiracy to steal stone.
Perry, (49), of Wallshaw Street, Oldham, who also pleaded guilty to driving while disqualified and handling a stolen vehicle, was sentenced to four years in jail.

Twenty-eight-year-old Connor Lipinski, of Gale Court, Rochdale, was handed a three-year jail sentence while Owen Lipinski of the same address was given a 15-month suspended sentence.

The total repair bill came to approximately more than £125,000.

The trio’s crime spree came to an end when officers from Cheshire Constabulary’s rural crime team identified Perry’s vehicle during their investigation into the theft at St Mary’s Church in Astbury.

It was caught on CCTV at the church leading them to more and more evidence linking the men to the crimes.

Raids were carried out in July at addresses in Middleton, Oldham and Rochdale by officers from Cheshire Constabulary’s rural crime team with the assistance of colleagues from Lancashire, Staffordshire, Derbyshire, and Greater Manchester Police. The Lipinskis and Perry were arrested simultaneously in the raids and later charged.

The investigation identified the location the stolen stone had been sold on to, which meant officers were able to arrange the return of some stone to three of the effected churches. A supplier of illicit number plates was also identified, searched under warrant and shut down. All three stolen vehicles involved were also recovered and returned to their rightful owners.

After last Wednesday’s sentencing hearing PC Rob Stordy: said: “By working together with other forces and with the expert help and advice from Historic England, we have brought these men to justice for pillaging our rich history.

“These crimes impacted the heart of our rural communities and left most of the paths impassable due to the damage the men had caused by removing the stones.

“I hope today’s result sends a message to thieves that rural crime is taken extremely seriously. We will do all we can to get justice for our rural residents and keep Cheshire a hostile environment for criminals.”

Mark Harrison, head of heritage crime strategy at Historic England, said: “The outcome of this case highlights the benefits of collaborative working between the Cheshire Constabulary, Crown Prosecution Service, church communities and Historic England and is an approach we shall continue to use when dealing with the theft of historic stone.

“The theft of stone from historic church buildings is serious organised acquisitive crime.
“Removing large areas of paving from church buildings has not just a serious financial impact on church communities but a significant impact on their morale.

“The stone stolen in this case will have historic and cultural value and its removal can lead to irreparable loss and damage not just to individual communities but to the whole nation, which is why tackling this type of heritage crime is so important.”

In a social media post following the sentencing hearing, Mrs Naylor said: “On behalf of St Mary’s, Astbury, a huge thank you to Cheshire Police, and also to the whole Congleton community. You were there to support us when we felt sick, offered help when we weren’t sure what to do, and showed love, care and compassion. It made us realise how much St Mary’s means to Congleton. So we are going to make sure St Mary’s is there for the whole community, well into the future.”