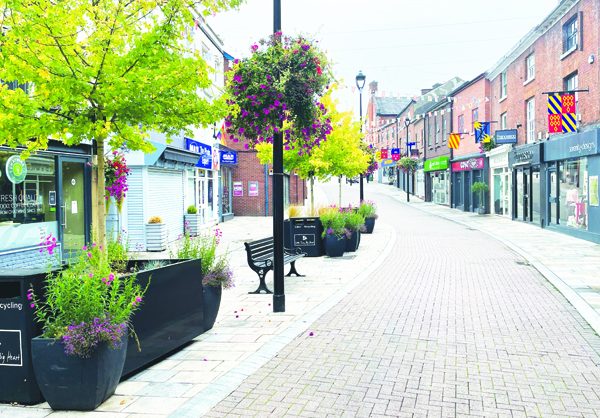 It was a sight that may have been more familiar to Congletonians during the lockdowns of the last two years, as the streets were deserted during the Queen’s state funeral on Monday.

Shutters on Bridge Street and Swan Bank shops were closed and, apart from the odd cyclist and dog-walker, the town centre was strikingly quiet.

Most people appeared to have stayed at home to watch the historic service at Westminster Abbey on television, although some ventured out to the few pubs that did remain open.

Among them was The Prince of Wales on Lawton Street, where in 2018 the-then Prince Charles popped in for a drink during a royal visit to Congleton.

Landlord Jordan Oldfield, who took over the pub in May, said that there had been “a lot of debate” about whether to stay open.

“Some said that they were going to shut as a mark of respect, but as a community pub and a place where people gather, I think it’s important to be open,” he explained.

“Grief is a very personal thing and people want to do it in different ways. It’s really important for people to be able to experience it in company if they want to. The brewery gave us advice about staying open, but because this is a monumental thing and nothing like it has happened for 70 years, there’s no guidebook on how to do it.”

He added: “The pub is vital for the community and it’s important for us to just be here for people.

“With the war memorial at the front, we seem to get a bit of attention whenever there’s an event there. We provided the music for the national anthem at the proclamation a couple of weeks ago, for example. I just think, if we can be open, we should be.”

In contrast to the lively atmosphere usually to be expected at The Prince of Wales, the mood was sombre as a screen showed the man that was until recently the venue’s namesake paying respects to his late mother.

One punter told the Chronicle: “I just wanted to come and watch it. It’s a historic event, but we all knew it was going to happen.”

On Mill Street, The Bull’s Head was the only venue to show the ceremony and procession, and several tables were occupied by guests sitting together, while others sat alone.

One drinker said that although he visited the pub most days, he came to watch the ceremony because the late Queen was “a great woman”.

Many, including town mayor Coun Margaret Gartside, remained at home to watch the coverage of the funeral.

She said: “I have been watching the television and I hadn’t planned on watching the whole thing, but you find yourself sitting there for longer than you had expected to.

“It’s a monumental occasion which only happens once in a lifetime. You can see that there is a role for the Royal Family in our lives.”