‘Unmaintained’ planters were ‘safe and colourful’ 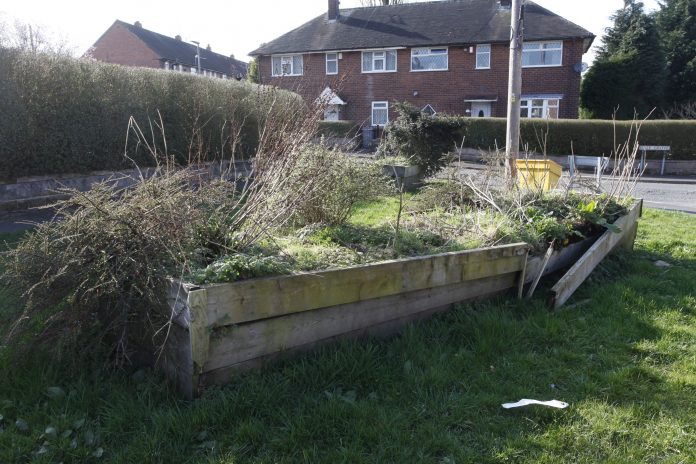 Planters that residents of a Congleton estate said were left unmaintained with “nails and screws sticking out of them” have finally been replaced.

The containers on Woolston Avenue were meant for floral displays as part of the annual In Bloom celebrations, but people living on the Bromley Farm estate have said that they have not been looked after since a local organisation took over their maintenance.

The chair of the Bromley Farm Community Development Trust has disputed these claims, arguing that they were safe and provided a “colourful display” in the time they were in place but that “vandalism” caused some issues.

The old wooden planters were replaced last week by newer, modern versions to the relief of one Woolston Avenue resident who could see them from her bedroom.

Sue Eyres said: “I have been complaining about the planters for three years but nothing was done until they literally collapsed. They were taken away the other day.

“I have had people at my house who said they were disgusted by them. They could have been dangerous because there were nails and screws sticking out of them. I was relieved when I saw that they were being taken away.”

Independent Coun Rob Moreton, who lives on the estate, represents Congleton East Ward at Cheshire East Council. He said it was one of the first issues he was approached about by residents when he was elected almost two years ago.

“It has been so frustrating for the residents of Bromley Farm, especially the ones that live next to the planters,” said Coun Moreton. “I totally understand that the team behind Bromley Farm in Bloom is made up of volunteers and they do some fantastic work for the community, but if they are putting planters around the estate they need maintaining all year, not just when it is competition time.

“In my opinion, covid can’t be used as an excuse for the condition of these planters as they were in a similar state of repair when I was first elected.

“I am so pleased the Streetscape team has removed two of the planters. It has made the area look so much better and taken away the stress caused to so many residents.

“I am delighted to say that people power has eventually won the day and two new planters are now in place. If anyone in the Congleton East ward has problems similar to this, please do not hesitate to contact me.”

Glen Williams, chair of the Bromley Farm Community Development Trust that was responsible for the maintenance of the old planters, responded to concerns last week.

He said: “The trust has received no complaints about planters on Woolston Avenue.

These planters were provided at the request of residents on the basis that they would maintain them. After a couple of years, the trust took over the regular maintenance and they have been safe and provided a colourful display during all this time.

“A plan was shared with residents 13 months ago to completely replant during 2020.

However, due to the global pandemic, the restrictions put in place and most of our Bromley Farm in Bloom volunteers’ having to shield, we were unable to complete this refurbishment programme, which residents had supported through consultation.”

Mr Williams added: “In the last few weeks, the wooden planters have been deliberately vandalised three times and on each previous occasion, the trust has provided a temporary repair.

“Following the last appalling incident of vandalism, which created the danger, we reported the vandalism to Cheshire Police and supported the decision of Congleton Town Council to remove them. We would welcome anybody who saw this vandalism occur to contact Cheshire Police on 101.”