What’s that running over the hill? It’s a Monster! 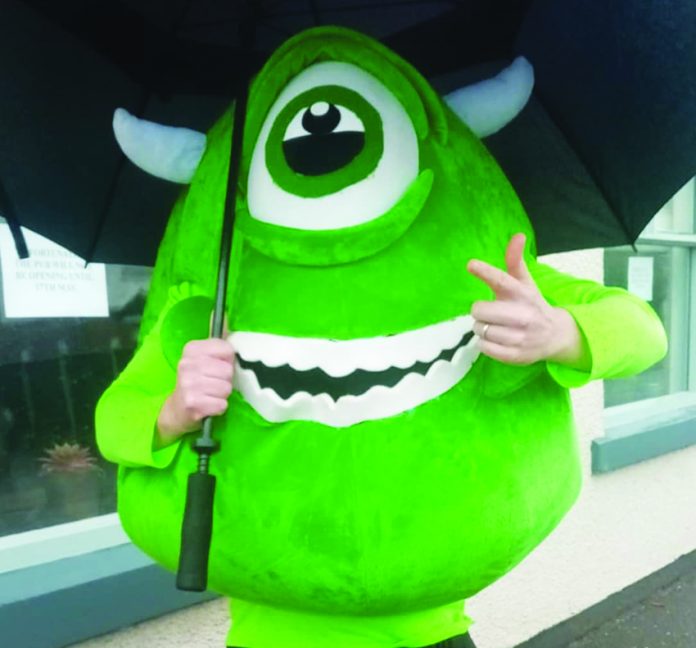 The newly-elected mayor of Biddulph came face to face with a monster as one of her first civic engagements.

Coun Sylvia Rushton waited in the rain to cheer charity runner Ritchie Berrie over the finish line after his half marathon trek which ended in the town.

Mr Berrie, (36), dressed as Mike Wazowski a character from the hit children’s animation Monsters Inc, for his fundraising run from Biddulph to Congleton and back.

The personal trainer said: “It was tough on the day. The weather was awful.

”I had a fan inside the costume that died half way through. I was literally dying of dehydration.

”It was great to see the mayor and the town crier at the finish line; it really meant a lot to me.”

Coun Rushton said: “It was a shame that it was raining but Ritchie, was very, very good. He had a smile on his face so that’s all that mattered.”

Mr Berrie has so far raised almost £800 for charity Brace’s dementia research and is hoping to clear £1,000.

Mr Berrie’s dad has vascular dementia and he got on his marks to raise money for people in a similar situation to his dad.

Brace is an independent charity which funds world class clinical and laboratory research into Alzheimer’s and other forms of dementia to find better treatments, achieve earlier diagnosis and to find a cure.