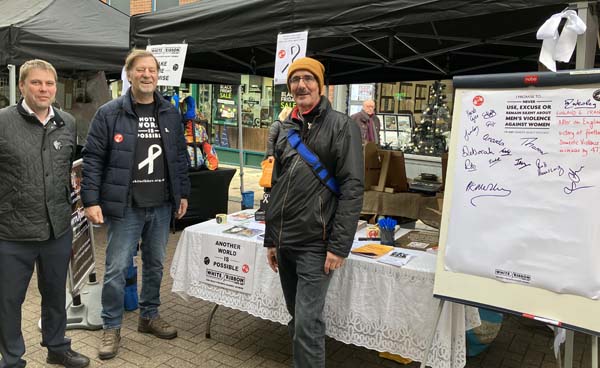 Congleton Town Council’s White Ribbon group started 16 days of action to spread the word about the campaign, kicking off with White Ribbon day on Thursday.

The White Ribbon campaign asks men to challenge the attitudes and behaviours that lead to men’s violence against women.

Congleton Town Council is a White Ribbon accredited organisation with an objective of ending all gender-based violence and abuse in Congleton.

White Ribbon day fell in the same week as the start of the World Cup, so the national White Ribbon organisation’s campaign carries the message “whether you’re a football fan or not, the goal is to end violence”.

The chair of the town council’s White Ribbon group, Coun Robert Hemsley told the Chronicle: “Sadly we know from research that the day after an England match, domestic violence increases by almost 20% and if England wins, it increases by 47%.

“The World Cup is a key moment to get the message across that this is not OK. Men have a vital role to play in standing against violence and abuse.”

The White Ribbon group consists of town councillors, council officers, and volunteers from the community who are (male) White Ribbon ambassadors.

The ambassadors manned a stall at the Congleton Makers’ Market on Saturday, to ask people to make the promise to never “commit, excuse or remain silent about men’s violence against women or any gender-based violence”.

Coun Hemsley added: “We had some great conversations throughout the day and lots of people came to make their White Ribbon promise. If anyone else would like to do this, they can do so now on the White Ribbon website.”

The focus for the team during 2022 has been young people, and the White Ribbon ambassadors have run workshops and presentations in local high schools throughout the year.

Ambassador Jonathan Dakin said: “The response from young people and their teachers has been incredible. They understand the problem and are highly motivated to do something about it. It has been inspiring to hear about the plans they have in school and they have been walking around wearing the White Ribbon on their school uniform.”

The White Ribbon Group has also invited pubs and venues screening the World Cup to display a White Ribbon poster.

Ambassador and Congleton Town Council chief officer David McGifford said: “Since the age of seven I have played and been involved in children’s and adult football. The sport offers an opportunity to set standards of behaviour and encourage respect for each other. I hope the local clubs are displaying the poster and will join us in promoting this positive message.”

The chair of the Community and Environment Committee, and White Ribbon champion Coun Kay Wesley, added: “The police have been concerned about the under-reporting of sexual assault for a long time, but reporting has gone up recently, which they attribute to victims feeling more confident coming forward.

“Although domestic abuse reports in Congleton remain stable at an average of one a day, the number of arrests has doubled, and again officers believe this is because victims are more confident to proceed as a result of the supportive messages in the White Ribbon campaign.”
People can make their promise at any time online at whiteribbon.org.uk.