Axing Congleton town tip would be ‘closure of convenience’ 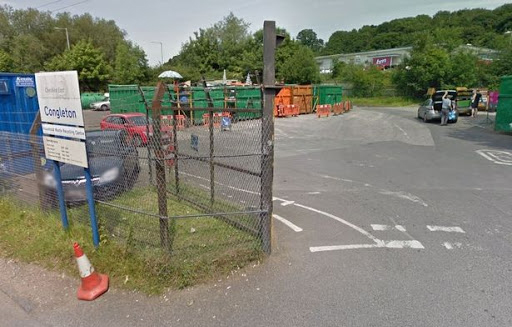 The town council is expected to protest the closure of Congleton tip by urging the borough council to find an “environmentally sound solution”.

At an emergency meeting due to be held tonight (Thursday), town councillors will sign off on an agreed position opposing Cheshire East Council’s announcement that the lease on the Barn Road site will not be renewed after it comes to an end in six months.

In a statement, the town council said that it may be a “short-term, convenient saving” for the borough, but it was one that will cause “long-term environmental problems”.

In the last week, a petition to Cheshire East Council against the closure of the tip hit more than 3,000 signatures.

The town council said: “We will be urging Cheshire East to provide Congleton with a household waste and recycling site, and not accept a short-term, convenient saving that will lead to a long-term environmental problem for the borough.

“The town council wishes to explore all the options with Cheshire East to ensure a long-term, environmentally sound solution for the area.

“Seventeen of the 20 town councillors attended a strategy working group meeting on Thursday to share knowledge and debate the best way forward. Recommendations from the group will be voted on at an emergency meeting tonight (Thursday) at 6pm.”

The council said that at the working group there was “unanimous support for ensuring that residents have access to a recycling site in the Congleton area for equality, environmental and economic reasons”.

In 2019-20, the Congleton recycling centre dealt with 2,790 tonnes of materials, 1,237 of which was recycled, 115 tonnes reused, 439 tonnes of green waste composted, 100 tonnes of hardcore sent for other purposes and 899 tonnes of non-recyclable material.

Town councillors anticipate that the closure of the town’s site will add to the loss of recycled waste into fly-tipping or the general non-recyclable system.

Cheshire East Council has previously said that the closure of the former Arclid waste site two years ago resulted in a 4% loss of its throughput tonnage and that 96% of its waste was taken up by other sites, leaving 4% either entering the dark grey household bins or fly-tipping

The town council’s statement added: “Even if the loss were only 4%, the closure of the Congleton site would result in the loss of 111 tonnes every year

“Town councillors suggested that closing the tip in Congleton is a closure of convenience because the lease has come to an end and that Cheshire East Council should be making a long-term strategic plan to provide improved recycling capabilities for the benefit of our environment.

“Time is short as the issue is due to be discussed at a Cheshire East meeting on Monday, and town councillors are hoping that borough councillors will not make a rushed decision.”

While members of the town council are expected to make representations at Monday’s meeting, one has already hit out at Cheshire East’s Cabinet member for highways and waste.

Lib Dem Town Coun Robert Douglas was due to demand an apology from Coun Laura Crane, at a Cabinet meeting on Tuesday. He said that Coun Crane had told a resident by email that visits to the tip could be replaced by giving unwanted items to charity shops or selling them.

Coun Douglas called this suggestion “totally inappropriate”, saying: “First of all, charity shops are only open for a limited time in the day, and we often see furniture and black bags dumped outside charity shops at weekends and at night. We are in danger of inadvertently increasing the problem of fly-tipping outside charity shops, which would then have to be cleared at an expense to the shops themselves, which has a negative impact on their good aims.

“Another danger is that people won’t think carefully about what they take to a charity shop and take a whole hoard of stuff that the workers and volunteers will find to be broken toys and faulty electrical equipment that they are not able to get rid of.”

The closure of the Barn Road site has also been challenged by Independent Town Couns Suzie Akers Smith and Rob Moreton, who said in a statement that they had quizzed Coun Crane on the logic behind it.

After receiving some answers, the pair said: “We learned the closure of the tip was inevitable. Many years ago, the previous Cheshire county council sold the land only to lease it back to be used as a tip.

“The short-sightedness of this decision left the current administration no choice but to close the tip when the lease expires in September.”

They called for the council to reconsider its decision, or for it to reassure residents that a plot of land would be found for another tip.

A planning application has been submitted to Cheshire East Council for change of use of the tip site into a drive-through coffee shop.