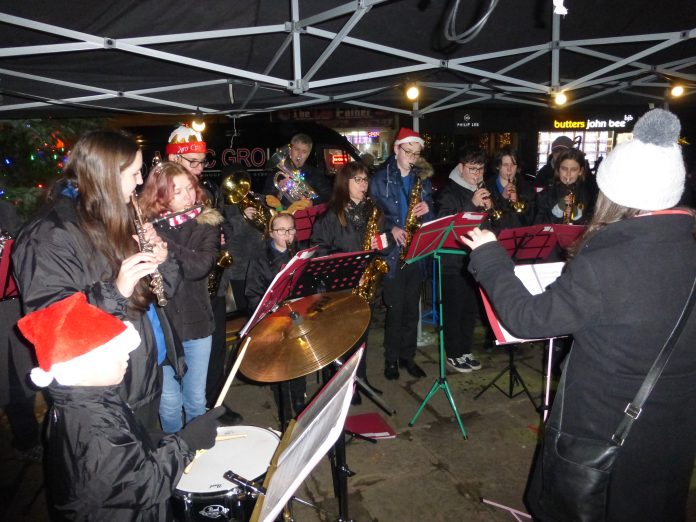 Following the large turnout for the Remembrance Day and light switch-on, the people of Sandbach and the surrounding area turned out in their thousands to enjoy the annual Christmas market and late night shopping event, with stall holders saying that this year was the best they had had, (writes Stewart Green).

Food vendors enjoyed queues from opening to the end of the evening at 8pm, with everything from burgers to cakes and everything in between. A wide variety of Christmas gifts were on display, from baubles to Christmas beads and even a Sandbach Gin bottled with the Saxon Crosses on the label.

Children’s toys were available with the growing popularity of wooden toys for youngsters taking the older generation back to their childhoods; many were being sold around the event, along with more adult decorations. In the indoor market were antique gifts, from old editions of the Blue Peter Annual to Dr Who toys and badges galore, knitted items and of course that essential Christmas jumper.

It was also a great Sandbach event with local produce; stallholders; charity fundraisers for the Sandbach Animal Rescue with a tombola; Girl Guides and Brownies roasting chestnuts, and the Scouts bric-a-brac stall selling items including decorations for the Christmas tree.
Tears for Fears’ original drummer Manny Elias and his wife Deborah returned with their usual stall on the end of the run by the Black Bear selling their Bongo’s Chillis and Pickles, which, for the first time since they have been coming to the Christmas market, sold out just before the end of the evening. Many stall holders sold more than they have done in the past, with some having to replenish stock over the evening.

The evening also involved the presentation of two annual awards, the best dressed Christmas stall holder – which went to Angela Hingston of Angie’s Vintage Emporium – in the market hall and the best Christmas shop window display, won by Jo Lins Fashions in the High Street for the first time since the cup was introduced to the town in 1972.

Over the years the shop has consistently produced a good Christmas themed window, which has only just lost out to other shops in the town over the years. Special mention must also go to the artist or artists who have drawn Christmas pictures across the town in various windows, making the shop displays look very different this year. Special mention must also go to Sandbach Town Council staff and councillors who put on the event and made it a success after the last few years of the pandemic and cancelled events, with many of the stall holders returning for another successful year.