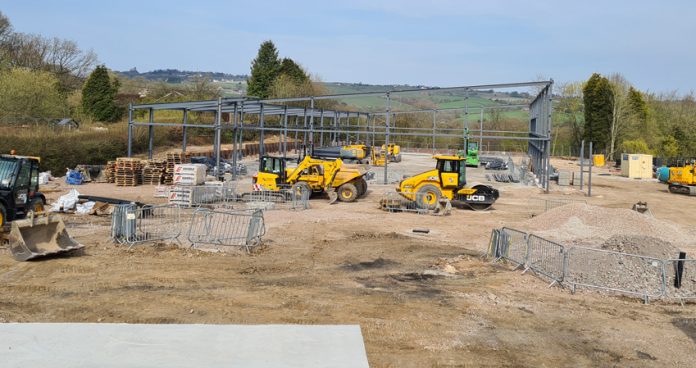 Concerns that light from “excessive” illuminated supermarket signs could shine through the windows of nearby houses has led to councillors recommending conditions.

As part of the new Aldi store being built off Meadows Way, bosses applied to erect a number of signs varying in height from two to five metres.

But as six new houses that are expected to overlook the supermarket are being built on land off Tunstall Road, members of Biddulph Town Council’s Planning Committee considered whether signs should be “toned down” or restricted to certain hours.

At a meeting last Tuesday (20th), councillors signed off on the suggested name of the Tunstall Road estate – Church Mews – but discussed the effect its proximity to the Aldi store may have.

Independent Coun Wayne Rogers said: “I am not opposed to Aldi in any way, shape or form, but I think these signs are a little bit excessive. I think they should be toned down.” Labour Coun Jill Salt agreed. She said: “My concern would be the visibility of the signs from the new houses that are going to be built. If you look at the position of the estate compared to the Aldi store, those houses would be looking directly onto it.

“Having a big, illuminated sign lighting up your front window probably isn’t going to be very pleasant. We should look carefully at the way the signs are facing, particularly at those facing directly opposite the Church Mews site.

“If there is any way we can have them turned off at a particular time, or have them less bright than they might be, or change their angle, we should do that.”

Independent Coun John Jones added: “We approved the original Aldi application, and these will be their standard signs, so I think we have got to live with whatever they put up. They won’t be any different than the Aldi signs anywhere else in the country.

“As for the Church Mews houses, Aldi will probably be completed before the houses are built, so I don’t think it is a valid reason to put any particularly severe conditions on the signs.

“I am actually pleasantly surprised having seen the frame of the building go up at Aldi by how discreet and away from the road it is. I am impressed because it is not quite going to be the massive, glaring thing that some feared it might be.

“I would support what Coun Salt said about timings on the illuminated signs and I think if the store is shut, the signs should be off or at least dimmed.”

It was subsequently agreed that the town council would recommend approval for the signs to Staffordshire Moorlands District Council, the planning authority, on the condition that they are not illuminated when the store is closed, so that the people living nearby are not affected.