Confrontation erupts over face mask use at the Premier store in Hightown. 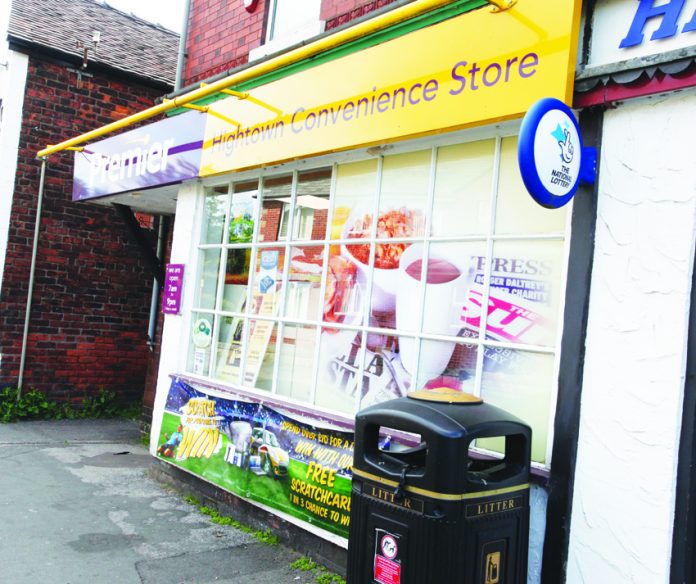 A confrontation between a covid-sceptic customer who refused to wear a face mask and a member of staff ended with the store worker locking the man in the premises and apparently calling the police.

The incident took place in Premier’s Hightown convenience store at Cross Lane, Congleton, and highlighted the pressure shop staff are under from people who do not believe covid security is necessary.

Footage of the confrontation at the Hightown store, titled “Service with a smile” was uploaded to YouTube by the man who says in audio before the recording starts that he is exempt from wearing a face mask “because I feel that I’ve got a brain and I actually think and chose not to wear a mask because I don’t believe in the virus”.

He also recounts entering the shop and previously being reprimanded for not wearing a mask by a pensioner. The film-maker claims to be reasonable in the film, but the shop assistant says in the video that he told the pensioner to “drop dead”.

In an apparently planned stunt – he was filming as he entered the shop – the man walks up an aisle and takes a bottle of milk from the shelf before heading for the checkout.

A woman can be heard saying: “I’ve told you before, no mask no service”, which she then repeats.

She comes out from behind the counter and tries to take the milk off him and he can be heard twice, saying: “You are discriminating against me.” She then accuses him of trying to steal milk.

The member of staff then tells him to give the milk it back and he says that he’s paid for the milk before saying: “There’s the money. I don’t need any change.”

She then appears to lock the shop door before walking back to the counter, saying: “It’s mandatory to wear a mask, mate.”
He says: “Only to me.”
She says: “No, to everyone.”

People are required to wear a mask by law unless exempt, which the man admits he is not. The police can take measures if members of the public do not comply with this law without a valid exemption, and transport operators can deny access to public transport services if a passenger is not wearing a face covering.

With a raised voice, the man responds: “That’s funny. I’ve only been coming in here a year without a mask,” adding: “You know what you’re doing now? You’re discriminating against me.”

The woman refutes this, but he insists, adding: “This is nothing to do with the virus, it’s discrimination.”
He then asks her: “How do you know I’m not exempt?”

Having been locked in, the man accuses the shop worker of kidnapping him to which she responds: “No, I’m waiting for the police.”

He replies: “Ring them then. I’m not bothered. They can’t do nothing.”

She then adds: “They get you out of my f* hair.” He then repeatedly accuses her of discrimination then, in relation to her calling the police, tells her: “I don’t mind. It doesn’t bother me. I’m waiting for them to come,” to which she replies: “Good.” He then tells her: “I’ll have you sacked from here. You’re wasting police time as well.”

She can then be heard behind the counter saying “Hello, I’ve got an abusive aggressive man in the shop. He’s not wearing a mask. He thinks it’s all a big conspiracy. I’ve told him I’m not serving him and he’s refusing to give me back the milk.” The man says: “A load of lies” adding “I put the money on there.” The man tells her: “I’m going to see your manager about this,” to which she replies “good” and then he says, “I’ll see your manager about this and you will be sacked.” The row continues as she is shutting the door. As the man again accuses her of assault, she says: “Oh stop being a f* baby”.

The sound then mutes, and the man walks off down the street.

A still at the end of the video, taken on a May evening, is of the masked woman looking out of the shop door with a caption underneath saying: “A woman that goes above and beyond over a mask.”

Store owner Steve Vickers would not comment about the confrontation when the Chronicle contacted him this week.

Usdaw, the shop workers’ union, said that incidents of abuse towards staff had doubled during the pandemic and the main triggers were issues such as face coverings, social distancing and queuing because of limiting the number of customers in shops.

The union has asked shoppers to “respect shop workers, be patient and understand that they are key workers providing essential services, helping to keep the nation safe”.

The shop workers’ union said it could not comment on specific incidents but added that in general, “shop workers have a really difficult job in keeping stores as covid secure as possible to help protect customers and staff from infection”.

A union statement said: “Numerous surveys lay bare the scale of the problem retail staff face and back up our concerns that it just is not taken serious enough.

“They demonstrate the need for a new protection of retail workers law, a specific offence that makes it clear that abuse is entirely unacceptable and will be dealt with in the strongest terms.

“Retail employers and the shopworkers’ trade union Usdaw are jointly calling for legislation to protect shopworkers from abuse, so it is time for the Government and MPs to listen.”