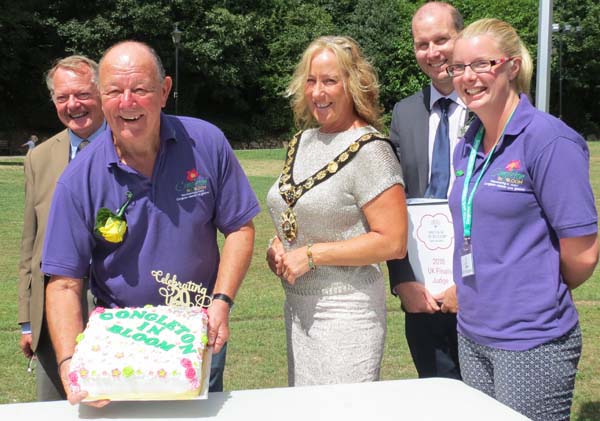 The town’s chances of winning the national In Bloom championship this summer for the first time in 23 years would be jeopardised if Cheshire East Council decides to close Congleton’s tip.

That was the warning issued this week by the chairman of Congleton in Bloom, Coun David Brown.

He said victory had now become “monumentally difficult” following the borough council’s expected decision to scrap the town’s household waste and recycling centre.
Other concerns have been voiced by town tidy champion Glen Williams, who organises litter picks and clearing of fly-tipping areas on behalf of Congleton in Bloom.

He said his volunteers “feel as if they have been kicked in the teeth.” When the town submitted its most recent In Bloom portfolio to the Royal Horticultural Society judges in 2019, Congleton’s household waste recycling rate was 87%, a major factor in the town becoming the North West champion.

That was the percentage figure advertised at the town tip showing how much of the waste deposited at the site was recycled. But if the tip is allowed to shut, it will be impossible to measure the recycling rate.

More than 50 organisations in Congleton – including schools, businesses and charitable bodies – have supplied more than 100 volunteers to the latest In Bloom campaign cause, a record number.

The In Bloom contest did not go ahead in 2020 due to the pandemic and Mr Williams claimed: “During the temporary closure of the tip during the first lockdown, the incidents of fly-tipping in Congleton increased eight fold.”

The Cabinet’s final decision on Congleton tip is expected on Tuesday, 13th April.
Mr Williams, a former councillor, said: “Every time the RHS judges come to Congleton, they say although they see many such wonderful floral displays, they see nowhere that is so free of litter and fly-tipping as Congleton.

“The actions of the Labour and Independent administration at Cheshire East Council can do nothing but diminish the pride the people of Congleton take in our town.”
He added: “Volunteers are happy to come along, provided they can see the local authority are doing their bit and fulfilling their responsibilities.

“They want to contribute because we all know councils do not have bucket loads of money at the best of times. The borough council seems determined to leave Congleton without a tip and ask the general public to sort everything out.

“So would-be volunteers will very quickly ask ‘why should we?’ The borough council are undermining all our efforts.”

At various levels of the In Bloom events, Congleton has earned 12 gold medals since the town started competing in 1998.

The most recent of the town’s three North West championships – in 2019 – qualified it for the 2020 national finals, which were called off. Instead Congleton goes into the finals in late July or early August of this year.

Coun Brown said: “To win the national award would be an incredible achievement but we need support from everyone, especially the borough council.

“Recycling has always been a big factor in Congleton, being awarded gold, and we have always been in the UK top 50.

“In leaving us with no tip to measure the recycling rate, Cheshire East Council is failing to address its own specifics and objectives in terms of climate control and trying to be carbon neutral. The actions of the Labour and Independent administration flies in the face of everything we should be doing to address the climate crisis.”

Coun Brown is a Conservative who sits on both Congleton Town Council and Cheshire East Council. He added: “I love everything about Congleton in Bloom or I would not have been its chairman for the past nine years. To me, it is personal.

“You would have thought with something as vital as our household waste and recycling we could have put any differences of opinion to one side and worked together for the common good of the whole community.”

It is feared that the closure of Congleton’s tip will generate tonnes of extra carbon emissions, because of the extra journeys Congleton people will make to refuse sites at Macclesfield and Alsager.

Coun Brown said: “We have been working hard to make the town even greener and even more carbon free. We are committed to planting 30,000 trees over the next five years which will reduce our carbon emissions by 7%.

“Losing our tip would more than treble the carbon emissions we save by planting trees.”

He added: “As if that was not bad enough, a lot of people will burn rubbish in their back gardens rather than drive to the tips at Macclesfield or Alsager, which will have further impact on carbon emissions.”

Last weekend, the amount of people who had signed the online petition to save the Congleton household waste and recycling centre, initiated by Liberal Democrat Paul Duffy, rose to more than 3,000.