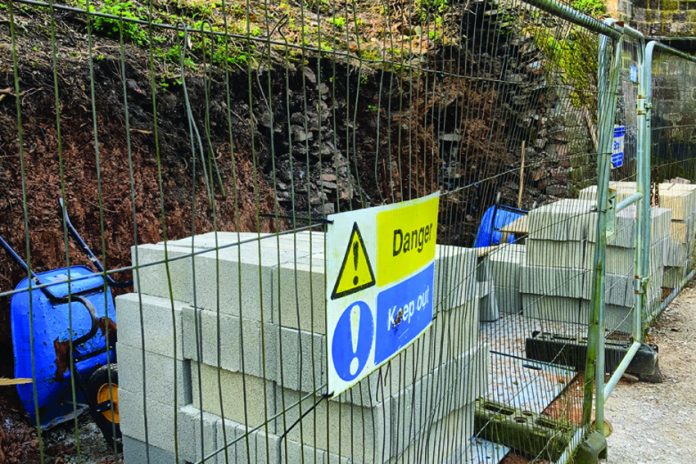 Work on a historic local landmark has got under way, after being delayed by the pandemic.

A retaining wall adjacent to bridge 77 on the Macclesfield Canal – better known to locals as snaily bridge on Lambert’s Lane – collapsed a couple of years ago. The Canal and River Trust was given permission to repair the wall in 2018 but the scheduled date for repairs was early 2020 and was halted by the lockdown.

The Macclesfield Canal was one of last narrow gauge canals to be built and opened in 1831.

The canal was a Thomas Telford canal, constructed using cut and fill, with cuttings and embankments to allow it to follow as straight a course as possible. High embankments and ambitious cuttings were hallmarks of Mr Telford although he had little to do with its construction, which was managed by William Crosley.

The canal opened in 1831, with a single flight of 12 locks at Bosley, raising the level by 118 feet (36m). The canal runs from a junction with the Peak Forest Canal at Marple, through Macclesfield and Congleton and meets the Hall Green Branch of the Trent and Mersey Canal.

Snaily bridge was so designed, like others on the canal, to allow a barge horse to change sides on the towpath while not having to be uncoupled from the boat it was towing.

The retaining wall had been unstable for some years and the trust had planned to carry out repairs in 2018-19. But bad weather led to the wall collapsing before it could be taken down. All the stone was taken to a trust yard and stored, so it could be reused in the repair.

The trust is now using breezeblocks to build a wall behind the facing stones, and reuse the salvaged masonry on the face.

Workers will also repair other parts of the bridge while they are on site.

A workman told the Chronicle that the work had yielded one surprise – the wall seen by canal users for decades was not the original, which could be seen curving away inside the outer layer of stones.