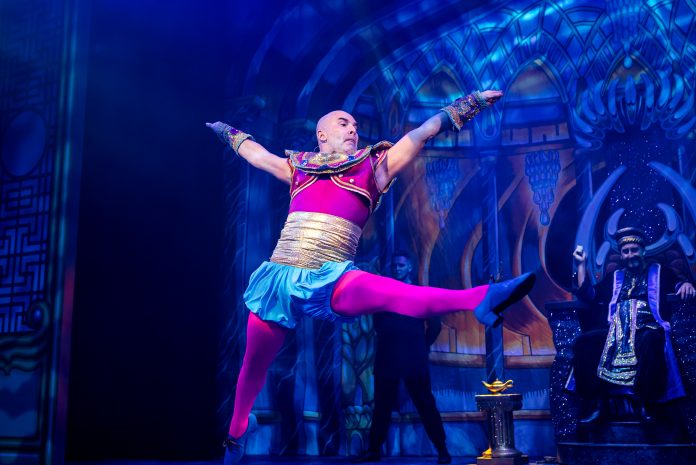 Crewe once again provides a highly entertaining family-friendly festive show with this year’s production of the classic tale of Aladdin.

The rule of panto reviews is that what happens in panto stays in panto, but you all know the story of Aladdin – boy, wicked conjurer, lamp, genie – and what passes for a plot is linked by comedy, song and dance.

Spence as the Spirit of the Ring is undoubtedly the audience favourite as he pirouettes, puns and performs his way through his role as the minor genie from the ring, with Kenna often playing the role of his straight man. 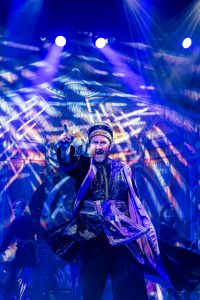 Kenna is Abanazer the evil magician, although he seems to be enjoying himself far too much to be really evil as he encourages the audience to boo and is the source of all the “Oh yes, you do!” banter so essential to any panto.

Johnston as Wishy has the job of breaking down the fourth wall and addressing the audience directly as well as covering for the odd forgotten line and stage mishap, which only adds to the enjoyment. (At one point he fell twice and, leaving the theatre to icy pavements and wearing the same Converse shoes as Wishy, we suddenly had a lot of sympathy).

Panto is known for mixing experienced actors and the newbies, the latter often ironically taking the titular roles that are usually less well developed. Thomas A Chan as Aladdin is in his first professional role. He lacks the physical presence of some of the more established names – that’s down to experience and sheer size – but he’s very good and is a name to watch. We expect to see him on television soon. He sings well, too.

Kiera-Nicole is also good as Jasmine, her experience showing, and Atherton plays the genie well, possibly the winner of the biggest smile of the evening, though all the cast seem to be having fun. Lord as Twankey leaves no pun unturned, and few double entendres escape him, either.

All this is a little by-the-by as Aladdin is an ensemble piece and any review fails to capture the interaction between the audience and the cast, which begins from the start with boos, random applause, sound effects (from the crowd) and catcalls all adding to the fun, creating an evening of festive entertainment.

The dancers were all good – the supporting cast includes Michael Dean Wilson, Sophie Hirst, Sian Fourniller and Joey Warne – supported by children (we assume from a local group) who are also clearly having fun.

Aladdin is written by Eric Potts, who makes sure he gets all the corny old jokes and local insults into the script. 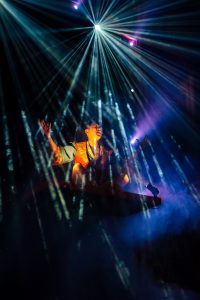