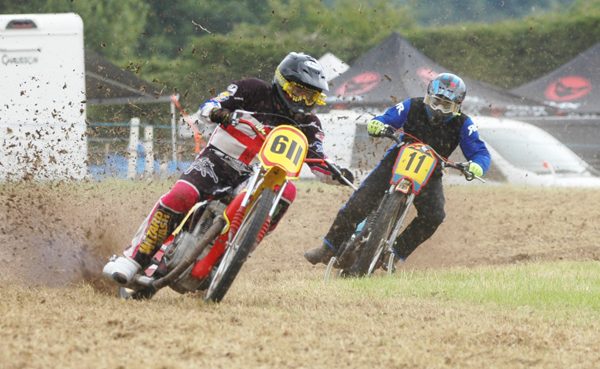 The event attracted racers from across the country, aging in range from teenagers to riders in their late 50s, and even one rider in his 70s “who is still on top of his game” according to Mr Norcott.

Several former riders for the former Stoke Potters speedway team were competing, notably Tony Atkin from Chester in the ACU British Championship Upright solo 500cc, who seemed to comfortably win all his heats; we were hoping for results before we went to Press. Upright refers to the position of the engine, which points upwards.

The club’s David Norcott told the Chronicle that the event – held last year at Scholar Green – had attracted a good crowd, and it was evident fans had travel from all over, including a good number from the Midlands.

Planned quad bike races had to be dropped, as there was a championship event elsewhere in the country on the same day, and entries were low.

The club’s next event is on Saturday, 17th September, the Fylde ACU British Sand Masters 2022 on St Anne’s Beach. The event features solos, sidecars and quads. First race is 12.30pm and entry is free.