Town hoping for a festival ‘bounce’ 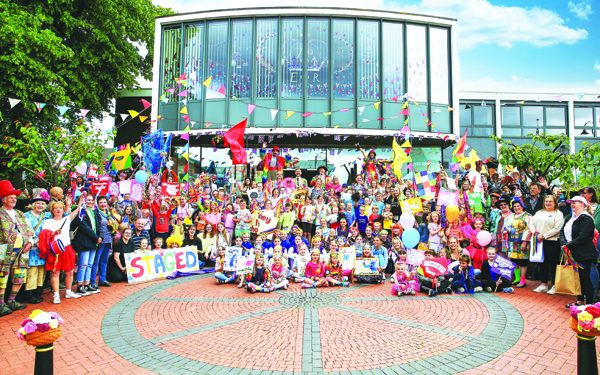 The start of Biddulph Festival “went down very well” was the verdict following the launch parade for this year’s month of fun and entertainment.

It is hoped that its return for the first time in three years following the pandemic will give the town a “positive bounce” as more people come back to the town centre.

This year’s theme is colour, and children from local schools lined up with community groups to dazzle the spectators as the took part in the procession.

It was led by members of Biddulph in Bloom carrying a banner in memory of the chair and founder Hilda Sheldon MBE, who died last month.

Following the parade, crowds gathered at the town hall for an afternoon of entertainment.
Children made the most of the Biddulph by Sea sandpit, one of the festival’s main attractions, rescued at the 11th hour this year after the original suppliers could not deliver the sand, as reported on the front page of this edition.

Jacky Nevill, chair of the Biddulph Festival Committee, said the banner tribute for Mrs Sheldon was “very poignant” adding “very much so when the procession passed by the shop,” referring to Brammers Shoe Shop, which was Mrs Sheldon’s family business.

Mrs Nevill believed the festival “means a lot” to Biddulph.

“It was nice to have something like ‘coming back to normality’ and Saturday’s parade gave an extra buzz to the town. There was plenty of excitement for the children who had missed out on the festival for the last two years or so,” she added.

“Hopefully businesses will have benefited as town was busier than a normal Saturday. People were staying around and the weather was on our side.”

Town mayor Coun Jim Garvey said: “It was brilliant to have the festival back again after two years and to see everyone enjoying themselves. And it was great to see all the different schools and local organisations in their colourful themes taking part in the launch day parade.”

He hoped that businesses would get a “positive bounce” thanks to the month-long festival.

“People want to get back out again and at least have a sense of what life was like before the pandemic. If people are out in the town they are going to be supporting local businesses and that’s great for the town.”