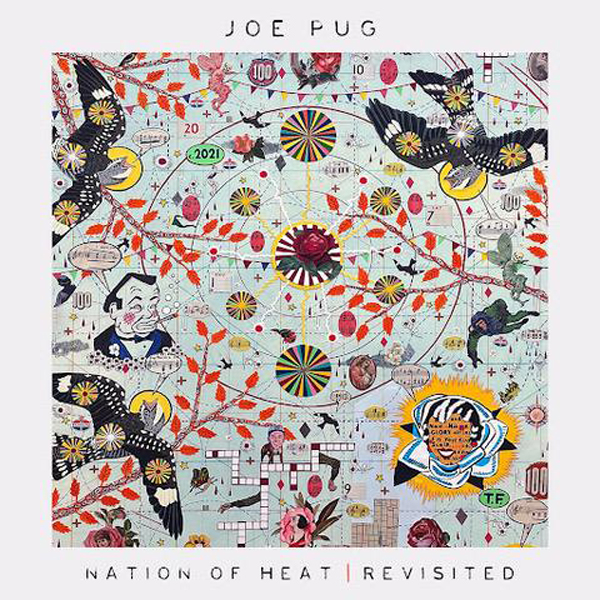 Pug released this debut album / EP 15 years ago when it was apparently acoustic (we won’t pretend we’ve heard of him before), with the usual “new Dylan” comparison, made when any male playing a guitar and singing at the same time releases a half-decent album. He toured with Steve Earle in 2009.

It’s still his biggest album and we guess it’s his only real success (he stopped touring in 2014 “because I needed to eat healthy food”) but he’s now remade it with a band, and it’s excellent, the only flaw being its shortness. There are a couple of real classics and some great keyboard playing (Hammond B3, Phil Krohnengold).

The sound is now more the melodic Americana of Marc Cohn. You might not have heard of Pug (Pugliese) but others have, and the PR says there are contributions from Brandon Flowers (The Killers), Carl Broemel (My Morning Jacket), Derry Deborja (Jason Isbell and The 400 Unit), and Courtney Hartman. We suspect they are drawn as much for his lyrics, which are deep – he’s been compared to John Steinbeck and Walt Whitman.

Hymn #1 opens, plenty of tom toms and piano as Pug (who has the same silk vocals as Marc Cohn) offers enigmatic but poetic lyrics. It could be to do with American settlers, but Jesus is also a possibility: “I’ve come to know the wishlist of my father” and “I’ve come to meet the sheriff and his posse / To offer him the broadside of my jaw”. (Later comes Hymn #35, “I am the day, I am the dawn / I am the darkness comin’ on”).

Nobody’s Man is next, equally enigmatic but a touch more Springsteen in sound and tone. “There’s splinters in my fingers / And there’s Portland cement in my lungs … I got a hammer and a coffin” he sings, suggesting a proud manual worker, “They might find my body at the bottom of the pile / But I’d rather be nobody’s man than somebody’s child.”
Drummer Mark Stepro has some fine moments.

The more Cohn-like I Do My Father’s Drugs is one of the standouts on an album of strong songs, possibly about sons repeating the errors of their fathers, history repeating the mistakes of the past: “There’s no bravery in bayonets / And tearin’ down the gates / If you see me with a rifle / Don’t ask me what it’s for / I fight my father’s war”.

The very Dylan-sounding Speak Plainly, Diana edges it as the standout, for the chorus, but maybe the harmonica. There seems to be a domestic theme: “There’s a wrecking ball in the front yard / But there’s blueprints on the couch / Speak plainly to me, Diana / We’ll build ourselves a house,” but whether he means literally a housebuilder or more a willingness to change his life is not clear. The title track closes and brings it all together in one song, swirling Hammond, fine drumming, harmonica and one-liners such as “If I didn’t own boots, I wouldn’t need feet” and “We got two-dollar soldiers and 10-dollar words” as well as “I seen skeleton mothers and hungry folks / Across the street from the kitchens that cook dinner the most”, clearly a comment on his homeland.

All in all, an excellent album and far too short.