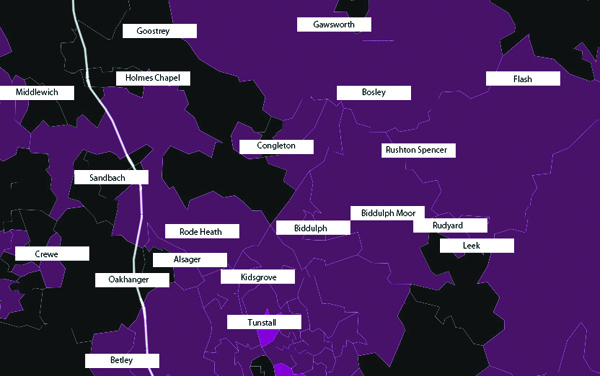 It’s a good job the Government introduced a new statistical band for covid infections, as most of our area saw covid cases rocket in the seven days to 29th December and large parts of the Chronicle circulation area are in the highest band, 1,600 cases and above per 100,000 people; the national seven-day average up to 29th December was 1,526 cases per 100,00 people.

While Omicron seems milder, a small percentage of a large number is still a large number, and as Dr Anthony Fauci said this week, people should be looking at the hospitals, not the higher number of diagnosed cases.

However, the cases fell between the weekend and Tuesday, when this report was written, so maybe Omicron is peaking.

This was despite the fact that between the same two dates, 1,189,985 people had a confirmed positive test result, an increase of 50% compared to the previous seven days.

Locally, in Staffordshire Moorlands there were two deaths between the 28th and the 3rd, an increase of 100% (up from one death the previous week); in Cheshire East, however, there were seven deaths in the same period, a rise of 600% compared to the previous seven days, when there was just one.

In the Moorlands, between 20th and 26th December, 106 people went into the care of University Hospitals of North Midlands NHS Trust with coronavirus, an increase of 51.4% compared to the previous seven days.

There were 84 patients in hospital with coronavirus on the 28th, 12 on ventilators. The trust includes not just the Moorlands but Stoke and Stafford.

In Cheshire East, 23 people with coronavirus were admitted to Macclesfield District General Hospital between 18th and 24th December, an increase of 109.1% compared to the previous seven days. There were 23 patients in hospital on 28th December, none on a ventilator.

Eight people with coronavirus were admitted to Leighton Hospital between the 20th and 26th, a decrease of 38.5% compared to the previous seven days. There were 23 patients in hospital on 28th December, two on ventilators.

The large Cranage and Goostrey area, which runs from the north of Cranage to Nick i’ th’ Hill via Swettenham and Astbury, had 120 new cases (+41), pushing it into the higher black zone, with a rolling rate of 1,724, up from 1,135 last week and above the national average of 1,526.

Congleton Town was also black, with 122 new cases (+41), rolling rate 1,690, up from 1,136. The rest of Congleton had fallen out of the highest band by Tuesday, despite being black on Sunday.

Gawsworth and Macclesfield Forest, another large area, which reaches to Goostrey and covers Marton and Eaton, had 153 new cases, up 26, its rolling rate 1,574, up from 1,308.

Only one area we have been reporting on saw a drop: Davenham and Moulton, an area running to the west of Middlewich, reported 78 new cases (-12), although its rolling rate was still 1,278.