‘Our Elizabeth’ cemented in town’s history 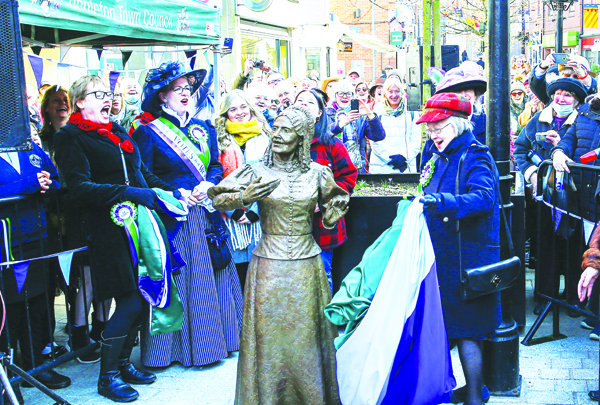 There was an ecstatic atmosphere in the “feminist republic of Congleton” on Tuesday when a bronze statue of the town’s most famous daughter was unveiled after a three-year-long campaign.

Elizabeth Wolstenholme Elmy, one of the most significant figures in the women’s rights movement, was finally cemented her place in the town’s history on what was international women’s day.

She lived in Congleton for more than 50 years, taking on the patriarchy of the late 19th and early 20th centuries as she relentlessly campaigned for women’s right to vote, girls’ right to an education and other battles that marked her as a figure ahead of her time.

In 1912, the newspaper of the Women’s Social and Political Union, the leading suffragette organisation, said: “If the women of England ever realise what they owe to Mrs Elmy, they will put up to her memory a national monument.”

On Tuesday afternoon, crowds gathered to witness the “fulfilment of that prophecy,” in the words of Susan Munro, chair of Elizabeth’s Group, who has been at the helm of efforts to give their heroine pride of place in the town.

Moments before the unveiling on Bridge Street of the life-size statue called “Our Elizabeth,” designed by Hazel Reeves, Mrs Munro spoke about the challenges the group had faced over the last four years.

“In 2018, a small group of women realised exactly what they owed to Mrs Elmy and have fought to raise money, to stand here in Elizabeth’s hometown and to raise her presence in the public consciousness,” she said.

“It has been a rollercoaster of a project. We have known some tremendous highs and some devastating lows, but the driving force that has kept us going is the knowledge that Elizabeth never gave up.”

One of those lows was when the pandemic struck, stopping all fundraising activities with just over a quarter of the funds raised.

Mrs Munro explained: “We were ready to give up but drawing on Elizabeth’s strength and remembering the things she achieved, we set our faces like flint, changed tactics and, ultimately, triumphed.

“I hope that if the rollercoaster of life takes you down to a dark place, if you have a mountain to climb or an insurmountable problem, if your enemies are many and more powerful than you, I hope that you will look at our Elizabeth and remember this small group of women who refused to give up, who drew on Elizabeth’s strength and battled on against the odds to fulfil that 100-year-old prophecy on international women’s Day 2022.”

Kay Wesley, a trustee of the group, became the first elected Women’s Equality Party councillor three years ago, which led to one media pundit calling the town “the feminist republic of Congleton.”

“I think our Elizabeth would be pleased with that,” said Coun Wesley.

“Modern Congleton is a town of feminists. In other words, a town of people that believe in equality for all, regardless of sex, but also age, ethnicity, sexual orientation, gender identity and disability.

“I am proud to be part of today’s Congleton, and Our Elizabeth will stand here proudly to remind us that we must continue to strive for equality and never take our hard-won freedoms for granted.”

The statue was unveiled by the former president of the Supreme Court, Baroness Brenda Hale of Richmond, who described the occasion as “one of the greatest days in Congleton’s history.”

She said: “The more I found out about Elizabeth, the more I thought what a wonderful woman she was. She was way ahead of her time, and Congleton should be very proud of this remarkable woman; a small woman with a big brain, a big heart and a big constitution.”

Our Elizabeth’s designer is best known for creating the bronze sculpture of suffragette Emmeline Pankhurst in Manchester.

On Tuesday, Ms Reeves spoke directly to her creation: “I hope you realise, Elizabeth, how fussy I am about who I sculpt. Only if I am truly inspired to tell someone’s story will I be able to summon up the physical and mental energy required.

“But within a few moments of being told about you, I realised I had to tell your story. I wanted to sculpt you in full-flow, showing how powerfully persuasive your words were.
“We need to have more role models on our streets, reminding us that women have always done extraordinary things, inspiring the next generation to continue your work for women’s rights.”

The unveiling was seen as the first big celebration of Congleton’s history this year, with more on the way as the town marks 750 years since the granting of its charter.

Town mayor Coun Denis Murphy said: “We all owe Elizabeth an enormous debt and it is fitting that she should be commemorated in our town in this important year.”

Tuesday’s celebration included Victorian-themed stalls and games on Bridge Street as a well as a parade and Elizabeth’s Punch and Judy show.

As we have reported, the project was completed with the help of a woman who probably achieved what Mrs Wolstenholme Elmy hoped future women could do: Betchton entrepreneur and Bet365 owner Denise Coates, who chipped in the final £20,000.