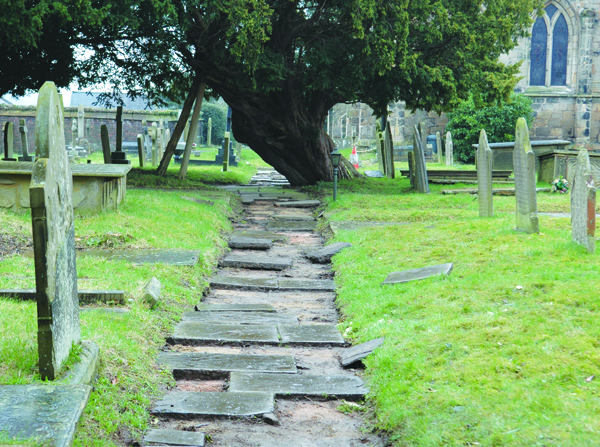 The cost to replace historic paving stones stolen from the path at Astbury St Mary’s Church will run into five figures, it was said this week.

But while the Rector of Astbury, the Rev Ann-Marie Naylor, pointed to the financial cost of last Wednesday night’s theft, she said what was more upsetting was that someone would disturb what was “a very tranquil people place”.

She appealed to the public to be more vigilant when passing unattended public places.
Police believe the paving stones were stolen between midnight and 4am on Thursday and are appealing for witnesses.

Mrs Naylor told the Chronicle: “The cost of this could run into five figures.

“There is a financial aspect to it but it’s the fact that somebody would disturb what is a very tranquil people-place, especially because of what’s going on in the world at the moment.

“We are allowed to feel upset about this. It is a sanctuary, a beautiful, spiritual place, a place of tranquillity and peace.”

She added: “The police said that very often people do this sort of crime wearing high vis jackets. They park up, put down some cones and no-one challenges them.”

Mrs Naylor made this appeal: “Everyone could keep a lookout when passing their local church and if they see someone doing something, they should ask them what they are doing – and ask the clergy if they are supposed to be there.

“The whole community can make a difference by being vigilant around our unattended public spaces because they are so precious.”

As a result of the theft access to the church from the village hall side is unavailable but the front entrance is unaffected.

Posting about the theft on social media Mrs Naylor said: “One of Astbury’s lovely old church paths has been stolen in the night. The church and its grounds give people so much peace – I can’t believe people would violate this, especially now.

“We are very sad – old stone like this is going to be difficult and expensive to replace. Please keep an eye out on old churches and check whether ‘contractors’ are real – the police tell us this is a common pretence which lets thieves go unchallenged.”

In their appeal for witnesses police said the theft of historic paving stones, which had been dug up, had caused “significant damage” to the church grounds.

“The damage is such that the path will be out of use for some time and will need a significant amount of funds to repair,” said PC Rob Stordy.

“I would urge anyone who may have been travelling through the area and may have noticed anything suspicious or may have dashcam footage to contact us, so that we can find those responsible.

“We would also ask people pay particular attention to historic sites such as this when they are out and about, and again report anything suspicious.”

A spokesperson for Cheshire Police Rural Crime Team said of the thieves: “I have no words to describe these people, the impact it has on the church, the community is massive. The cost financially is big too, it’s such a sad thing to see.”

Alternatively information can be given anonymously by contacting Crimestoppers on 0800 555 111.