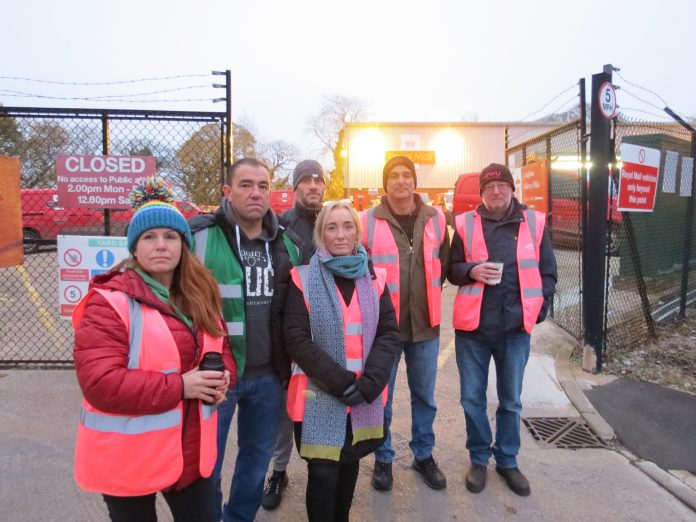 Posties were on the picket line in Congleton and Sandbach this week, as workers argued they had “no other option” after a dispute with Royal Mail bosses deteriorated.

Members of the Communication Workers Union have been protesting about pay since earlier this year, although postal workers have said that over the last few months the clash has become more about the conditions they will be expected to put up with in the future.

They include the suggestion that Royal Mail could be split up into a separate letters service, which workers fear would be run down by bosses – and a parcels company that would be run for profit.

There are also concerns about the job of a postal worker becoming more like an employee in the gig economy, in which shifts could be handed out as and when they became available.
Meanwhile, Royal Mail has said it may need to cut up to 10,000 jobs by next August, blaming the move on strike action.

At dawn on Thursday, six postal workers who usually cover Congleton were picketing outside the sorting office on the Greenfield Farm Industrial Estate, off Back Lane. It was the 10th time members of the Cheshire No1 branch of the union, which covers all postcodes beginning with CW, had been out to demonstrate.

The workers had been advised by their picket line supervisor not to give their names but were all in agreement when asked by the Chronicle whether the majority of customers in the town were behind the strike.

One said that they felt as though they “haven’t had a voice for months” and that, although they would rather not have to strike, it was “the only way to get our point across”.

Another explained that while the strike began as a protest against pay, it has evolved into a more general dispute about their terms and conditions.

The suggestion of annualised hours, for example, has been met with anger. It could mean that if a worker finished ahead of time while on summer shifts, they would have to make it up with longer hours in the winter. Postal volumes tend to be lower in the summer than in winter.

Kev Hughes is the secretary of the Cheshire No1 branch of the union, as well as a postman covering this region. He said: “We’ve had a lot of support on the picket line – maybe not so much in Congleton because the sorting office is on an industrial estate – but it has still been absolutely fantastic.

“People have been donating to our hardship funds and local cafes have been giving us free drinks to keep us going. The kindness of people has thrown me.”

He added: “We started striking over pay, but that seems irrelevant now. It’s more about the terms and conditions. They want to split the company up to make the letters side less profitable so that the focus is on parcels.

“They have announced they want to shed 10,000 jobs and go down a compulsory redundancy route. Meanwhile, the Royal Mail has employed 11,000 agency workers while we’re on strike. It’s basically a strike-breaking manoeuvre by the company.”

When asked whether he saw an end to the strikes, Mr Hughes said: “I really hope so, because I’ve lost about £1,000 on the picket line. But we’ve got no other option.”

Postal workers represent just one sector forgoing their salaries on the picket line ahead of Christmas, with teachers, nurses and rail staff also having voted to take action.

Tomorrow (Friday), postal workers from Congleton will be among those who will be on a coach to London ahead of a mass picket in Parliament Square, where the turnout is expected to be in the tens of thousands.

Have you got an view on this? Email a letter to the letter to chronicleseries@aol.com