Reopened pub now has its own defib machine 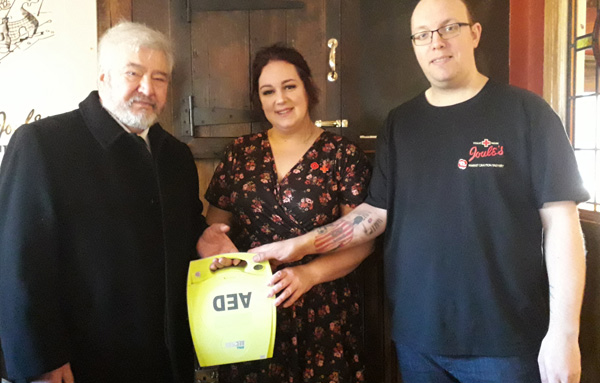 A revamped pub opened in Biddulph Moor this week with a new addition – a defibrillator.
The Rose and Crown, on New Street, reopened to customers on Sunday following a two-month closure.

In 2003, the defibrillator had been donated to the pub by the now disbanded community first responders and was discovered during the renovation “in a poor state in a dusty cupboard”.
With the help of former paramedic, Biddulph Moor Coun John Jones, new landlord Neil Casewell and partner Nic Preston were able to bring the old defib back into use.

Coun Jones, a member of Biddulph Lifeline, which campaigns for access to defibs across the town, told the Chronicle that it was up and running in time for the reopening at the weekend.

It was fitting that the pub was opened by Biddulph Lifeline chair Coun Ken Harper, who said: “It’s great news for the economy that the pub is reopen and it’s nice to see it up and running.
Having a new defib will give comfort to the people of Biddulph Moor.”

This unit means the number of working defibs in Biddulph Moor is now four. There are 23 in the wider Biddulph area.

Mr Casewell, who has some lifesaving training, said: “While there is a defibrillator across the road on the village green, seconds count and having a unit in the pub again could only increase the chances of a successful intervention should a customer ever need one.”

Defibs were on the agenda at a meeting of Staffordshire Moorlands District Council on Monday night. It was said that there were “a few” devices across the district that were unregistered. A dedicated working group was set up to deal with the issue.
(Photo: John Jones).