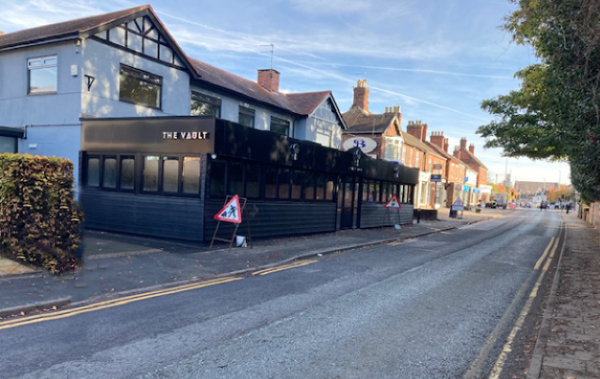 A restaurant in Alsager could now be forced to tear down its “black monolith” extension after it was built without permission.

The Vault on Crewe Road, which used to be Barclay’s Bank, opened in September but did not stick to plans for a veranda and outdoor seating area at the front.

A fully enclosed extension with a black exterior was built instead and while the restaurant plans had been given the go-ahead in January, applicant Ian Donaldson was told to submit a retrospective version.

This week, however, Cheshire East Council planning officers decided to refuse the application under delegated powers on the grounds that the extension “causes harm to the street scene and the character and appearance of the host property”.

The refusal notice also mentioned that “the proposed development would harm the setting of the adjacent conservation area and the grade II listed church of St Mary Magdalene”.

Officers concluded that “a solution has not been reached that overcomes the environmental harm identified in the reasons for refusal”.

An enforcement notice could now be issued from Cheshire East requiring the extension to be pulled down.

After being informed about the decision by the Chronicle, Bradley Lancaster, The Vault’s director and executive chef, said: “It’s something that I’m going to look into before I make a decision on our next move.”

A number of people commented on Cheshire East’s planning portal objecting to the retrospective application.

One said: “Most residents effectively woke up to a ‘big black box’ on their high street with no warning, no consultation and no planning.”

Referring to the 1968 sci-fi epic they added: “This is not supposed to be the big black monolith in 2001: A Space Odyssey, where a black box arrives without warning and causes consternation.”

Another resident from Coronation Avenue said: “It’s an absolute eyesore, it sticks out really far and looks absolutely awful, I do not know a single person who thinks it looks good.”

Concerns were highlighted that the extension was built before permission had been given. A resident Lynton Place, near to the The Vault, said: “This duplicitous approach shows an arrogant disregard for planning processes. If approved, it will set a dangerous precedent.” A Cranfield Drive resident agreed: “If this gets passed then we might as well scrap the whole application process as it’s clear, it’s pointless!”

Alsager Golf Club, Linley, which has no connection with Alsager Golf and Country Club on Audley Road, shared the sentiment, adding that the extension: “Should not be allowed.”

A Linton Place resident complained that The Vault’s customers have nowhere to smoke outside, so they caused an obstruction.

They said: “Smokers now gather on the pavement outside the doorway and we, and our children, now have to push past smokers on the way out of our road.”

Mr Lancaster had previously explained why plans for the extension had changed. “We took professional advice that it would benefit us, residents and also our customers to make it an enclosed space. It can now be used all year round, keeps sound in that will benefit our residents and also helps security benefits,” he said Mr Lancaster had added: “Not everyone will agree with the look of The Vault and unfortunately, we have received some negative comments, but alongside this we have had more positive comments than negative.”

* Do you have a view on this? Sent a letter to the editor at chronicleseries@aol.com