Time to stop the killing, says women’s equality party as it holds vigil for Sarah Everard and Samantha Heap 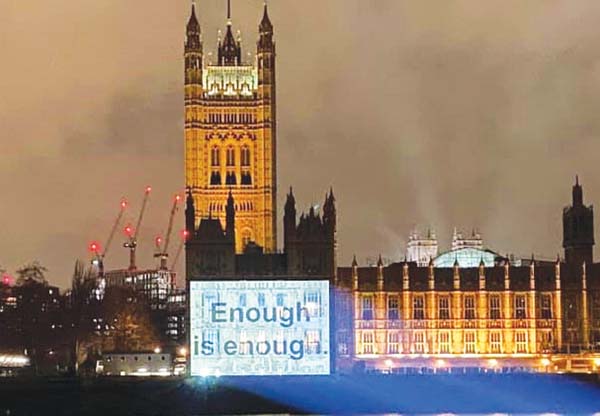 Equality campaigners have said “enough is enough” after the deaths of Sarah Everard in London and Samantha Heap in Congleton.

The Women’s Equality Party’s Coun Kay Wesley said: “Women are tired of being told to ‘keep ourselves safe’, ‘carry a rape alarm’, ‘don’t walk home alone’, ‘take a taxi’, ‘avoid dark alleyways’. Believe me, if we could stop ourselves being raped and murdered, by now we would have.

“The only people who can stop these crimes are men.”

Members of the Cheshire East branch of the party joined a Take Back The Night vigil at the weekend to remember Ms Everard, the woman whose body was found in woodland in Kent, and all women who have lost their lives at the hands of men.

In England and Wales, two women are killed by a current or ex-partner a week, and almost one woman in three will suffer domestic abuse at some point in her lifetime.

A recent YouGov poll revealed that 97% of young women have experienced harassment in the UK.

The vigil was organised online by Feminists of London and featured WEP party founder Sandi Toksvig and leader Mandu Reid as speakers, as well as Bell Ribeiro-Addy, MP for Streatham, where Ms Everard is thought to have died.

Participants lit a candle for a minute’s silence to remember Ms Everard and all the women who have died, and poems were read, such as Maya Angelou’s Still I Rise.

“Here in Congleton, Samantha Heap died last week, and I was thinking about her, too, during the vigil. My heart goes out to her family.”

Coun Wesley said: “The reason for this event is more than a memorial. We are calling on the Government to take real action to stamp out violence against women, which is at epidemic proportions in this country.

“Less than 3% of reported rapes resulted in a conviction in 2019-20, meaning that 97% of alleged rapists walk free.

“Here in Congleton, we have an incident of domestic violence reported every day, a sexual violence attack every week. This has to stop.”

The Women’s Equality Party invited women to tweet the ways they avoid getting attacked, such as “walk holding my keys in my fist”, “text my dad when I’m walking home”, “avoid short-cuts”, and projected these in large letters onto the Houses of Parliament on Saturday, as well as the phrase “Enough is enough”.

Coun Wesley has written to MP Fiona Bruce to ask that she supports the current amendment in Parliament to class crimes inspired by misogyny as hate crimes.

Coun Wesley: “If you are attacked due to your race, age, disability, sexual orientation, gender identity or religion it is classed as a hate crime and the police have to record it and have strategies to combat it, but if you’re attacked because you are a woman, this is not the case.”

Congleton Town Council is White Ribbon Accredited. Coun Wesley explained why this was important: “White Ribbon is about men standing up against violence. Sometimes men can feel defensive and say ‘well, I’m not violent’ but this is missing the point.

“Of course, most men are not violent. Of course, men can be victims, too but who are the perpetrators? Over 90% of murders in the UK are by men. This means that if we stop men killing, almost all the killing will stop. “Why should it just be women calling for an end to violence? Men, the vast majority of good, law-abiding men, have a huge role to play in calling out the toxic masculinity and sexism that help to foster aggression and violence.

“This is what White Ribbon is all about and I urge the men of Congleton to become White Ribbon ambassadors and stand with women in the fight against violence and abuse.”

People can sign up as White Ribbon ambassadors online at whiteribbon.org.uk

• A 47-year-old man from Congleton has been charged with murder following the death of Samantha Heap. David Mottram, of Flat 10, Mount Pleasant, 23, Nursery Lane Lane, has been remanded in custody.

He appeared before Warrington Magistrates’ Court on Thursday, via a video link, and was committed to Chester Crown Court on Friday, 5th March. He will return to the court on Friday, 28th May.

He faces a charge that on 2nd March in Congleton, he murdered Samantha Heap.

PC Wayne Couzens, (48), has been accused of kidnapping and murdering Ms Everard.