Vet’s plea for plans to be allocated ‘fairly’ 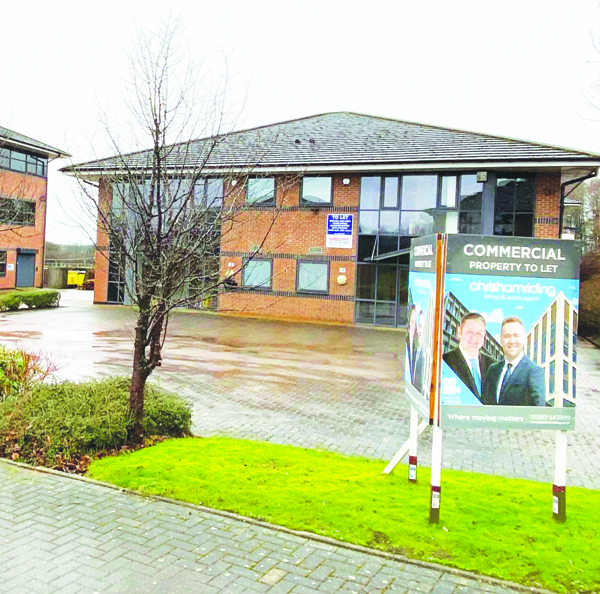 A vet who received more than 200 comments of support for his plans to open a new practice in Congleton has criticised Cheshire East for delays in dealing with the application.

As previously reported in the Chronicle, Dr James Ede has applied for a certificate for lawful use in respect of Unit 3, John Bradshaw Court – office buildings – to establish whether the existing use of a building is lawful for planning purposes.

Reasons why so many people have contacted the authority to support his proposal include the need for another vet in Congleton due to the rise in pet ownership during the pandemic – and because it would be an independent veterinary practice as opposed to a “huge corporate company”. Applicants also cite the number of homes that have been built in Congleton in recent years.

The planning application, registered on 22nd December, had been given a decision target date of 16th February – but a case officer has still not been allocated.

Cheshire East has already said that there had been a delay in dealing with planning applications due to the impact of the pandemic.

But Dr Ede is concerned that while a planning officer is yet to be allocated for his application, one has been appointed to consider a plan by a nationwide vet company, submitted after Dr Ede’s, with a decision target date in April.

After waiting two weeks following the February target date for his application’s decision, he wrote to Laura Hayes, Cheshire East’s senior planning officer, about his concerns.

Dr Ede told her: “I am a veterinary surgeon of 21 years’ experience, seeking to open a locally owned, private veterinary practice. All other practices in Congleton (and Homes Chapel, Sandbach, Macclesfield and other vast swathes of both Cheshire East and the UK more widely) are now owned by one of six huge corporate companies.”

His letter then referred to two other active planning applications relating to new veterinary practices.

One was for what he said was an independent practice in Knutsford whose plan, similar to Dr Ede’s, was registered at the end of November – its decision target date was 23rd January and, again, it has not been allocated a planning officer.

The other application by what he described as a “corporate practice”, was for change of use to veterinary hospital and emergency veterinary care service in Macclesfield.

That was registered in January, after the other two, has been allocated a planning officer and given a decision target date in April.

In his letter, Dr Ede asks the council: “I am intrigued why cases are having case officers allocated out of turn, and sincerely hope that this is not owing to the first two applications being submitted by local veterinary surgeons hoping to open their own independent practices, versus the third application,” submitted by what he understood to be a “much larger” company operating across the UK.

He adds: “Could you please advise why cases are being dealt with out of turn.”

Dr Ede’s letter goes on to ask: “Is it the case that if a decision is not given by your department within a suitable time after the target date, that the applicant is able to proceed with their planned works, or does this suggested new iron-ruling (applicants having plans rejected if insufficient information is sent) only work in the council’s favour, but at the expense of applicants?”

A spokesperson for Cheshire East Council said: “All planning applications are being allocated fairly, in date order, but customers will see some variation in some instances as the council matches its available resources to different types and sizes of planning applications, some of which have different legislative frameworks to follow.

“The council has continued to communicate to customers that they should expect delays with planning application decisions resulting from the service disruption during the pandemic.

“This information is a matter of public record – and the position is updated on the council’s website and within acknowledgement letters sent to all applicants (or their appointed agent) when they submit a planning application.

“The council is implementing a range of measures to handle the backlog of planning applications and we continue to make progress in that regard.”

In respect of Dr Ede’s application, the spokesperson said: “We will contact the applicant directly to confirm the status of their application for a certificate of lawfulness.

“A delay in the target date for decision does not give the applicant any additional right to proceed with their planned works.

“Any works that take place without the relevant planning permission, or certificate of lawfulness in place, would be entirely at the risk of the landowner and/or developer and could be liable to enforcement action.”