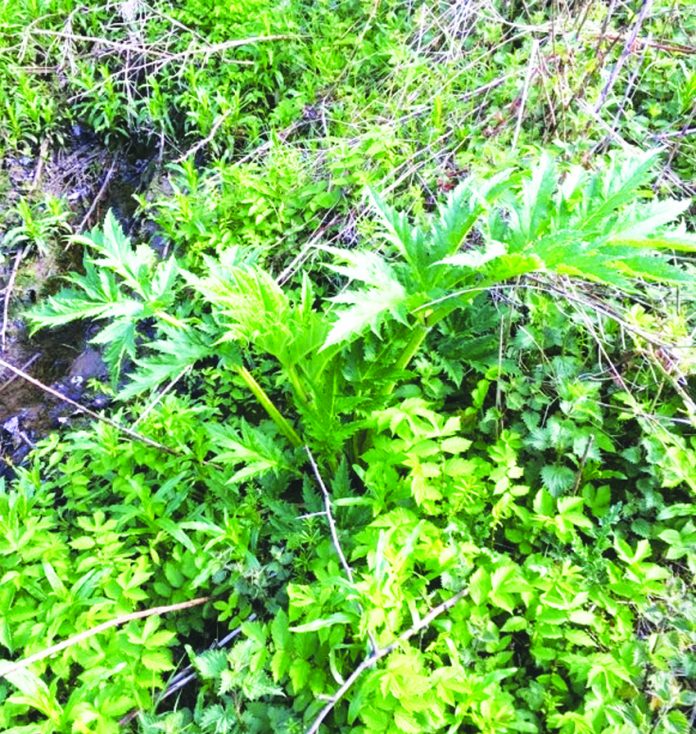 Walkers have been urged to report sightings of giant, “triffid-like” weeds that can cause severe burns if touched.

The warning came after giant hogweed was spotted on Biddulph Valley Way. The invasive plant which can cause blistering if skin that comes into contact with it is later exposed to sunlight.

The weed was spotted by a resident last week near a picnic bench at the Whitemoor section of the popular local walking and cycling route.

Labour Coun Nigel Yates, a member of the Friends of Biddulph Valley Way group, said: “Someone called me about it on Saturday, so I went down to where it had been seen. They were a bit concerned that if it went into flower, its seeds could cause an infestation of the stuff.

“I thought I would struggle to find it, but it was so big that when I saw it, I thought: Christ almighty, it’s like a triffid! I expected it to have my leg off!

“I wanted to make people aware of the plant because, if they report it, we can deal with it before it goes to seed. We have to nip this thing in the bud before it becomes an endemic problem. I did walk quite a way down the Biddulph Valley Way and, thankfully, I didn’t see any more of it.”

Coun Yates reported the giant hogweed to the countryside officer at Staffordshire Moorlands District Council, who will deal with its safe disposal.

The invasive plant is known for its ability to grow over 10ft high when in flower.

According to The Royal Horticultural Society: “Most gardeners will want to eradicate it, as it is potentially invasive and the sap can cause severe skin burns.” This is because a chemical in the sap affects human skin in a way that causes it to become sensitive to sunlight, meaning that it can burn and blister when exposed.

While the weed is found throughout the UK, it is most commonly seen along riverbanks as its seeds can be transported by water.

Coun Yates added: “It’s a bit weird because the chemical it releases doesn’t burn you there and then, it makes you sensitive to sunlight. When you go walking down the track and the sun shines on you, it causes burns.”

Giant hogweed can often be confused with cow parsley but, as Coun Yates described, the invasive plant is “like cow parsley on steroids”.

The Woodland Trust said giant hogweed can be identified by its stems that are green with purple blotches and stiff, white hairs. It has large leaves, similar to those of rhubarb with irregular, jagged edges and, when in flower, has clusters of small, white heads that face upwards.

Sightings should be reported to the district council.