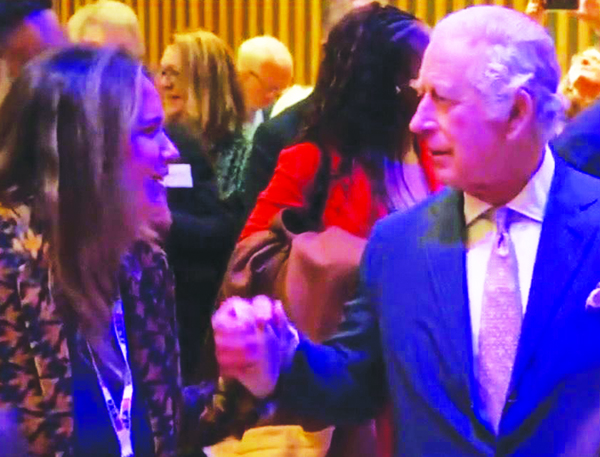 A Biddulph woman held the hand of King Charles III during a dance with Holocaust survivors.
The King was visiting JW3, a Jewish community centre in London where Gemma Kirk is the development director.

He was there to see its work, including a foodbank and to meet members of the centre’s Holocaust survivor group.

It was while the King was dancing with some of the survivors, including Anne Frank’s stepsister, 93-year-old Eva Schloss, that Mrs Kirk found herself next to the King.

The 44-year-old mother of two, whose late parents James and Joyce Mather ran what was Sew More Fabrics shop in High Street in Biddulph, said: “I had been dancing with the group to a klezmer band playing traditional eastern European Jewish music and there was real good vibe.

“One of the Holocaust survivors asked the King to join in with the dancing. He was so into it and was jigging around. One of those who was dancing was Eva Schloss, who is a regular at JW3. She is in her 90s but is full of beans.”

Mrs Kirk described what happened next: “The King was dancing with Eva and another man in his 90s. He let go of the King’s hand and Charles looked a bit lost, so I just grabbed his hand and had a dance with him.

“He was very nice and said, ‘do we go in and out like Scottish dancing? and I said, “I think so!”

She described him as “lovely”. “He was so genuine and looked right into your eyes when you spoke to him. He was totally enthralled.

“We had been told beforehand about all the protocol to follow during the visit, but he just wanted to warm to everyone and was kissing and hugging the Holocaust survivors.

“He was taking about fundraising with me. He was really genuine and shook my hand.”
The King also visited the centre’s foodbank kitchen, which regularly prepares meals for 200 people.

Mrs Kirk said: “When he walked in to the kitchen a woman was so surprised to the see the King that she dropped to her knees in shock. But he was great with her, making sure she was alright and chatted about the foodbank.”

Mrs Kirk, who has two daughters aged eight and 11, has worked at JW3 in Hampstead since May last year. Previously, she worked at the Chicken Shed Theatre Company in north London and before that was a celebrity agent.

She lived with her parents and sister Jane on Grange Road in Biddulph.

After leaving the high school she studied languages at Newcastle College and then took a degree in languages at university in Sheffield before heading to London.