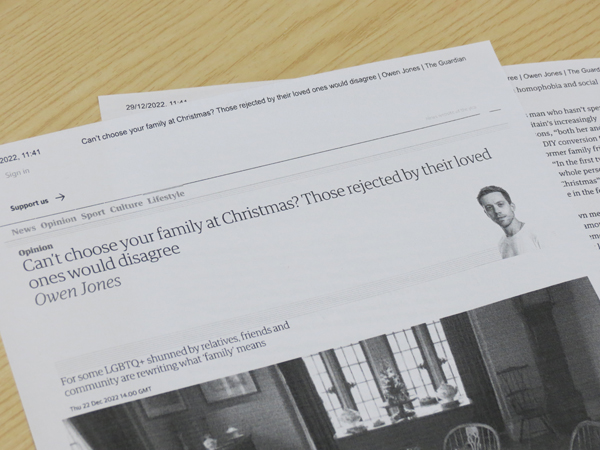 A disabled Congleton man rejected by his family over his sexuality planned to spend Christmas alone in a “cold flat” with a “49p pasty” for dinner, according to one of the country’s top columnists.

Owen Jones, a political commentator for the Guardian, wrote in a recent opinion piece that many LGBTQ+ people were isolated at this time of year because they might otherwise face abuse from family members.

He used the case study of a man in Congleton, who said that his family “don’t support homosexuality – it’s not for religious reasons, they just don’t like the ‘concept’ (in their words)”.

With the effects of the cost of living crisis and the man surviving on disability benefits, Mr Jones said that the man could not “afford to decorate his cold flat and he expects to eat a 49p pasty on Christmas Day”.

Research from the LGBTQ+ anti-abuse charity Galop found that almost three in 10 LGBTQ+ people had experienced abuse from a family member, which rises to more than four in 10 trans and non-binary people.

Richard Walton is the secretary of Congleton Pride, which will hold its fourth annual celebration of inclusion and diversity this year.

In response to the case study, he said: “It’s tragic in this day and age that people in those awful situations have to walk away and spend time solo so that they don’t face abuse. It’s a sad indictment on the parents and their lack of understanding.”

When asked how activists could combat such situations, he added: “I think it’s difficult, but education is important, and it needs to happen early. People at a younger age have to become more aware of LGBTQ+ issues. All you can do is talk to people.

“Congleton Pride tries to normalise things – we see LGBTQ+ people out in the community having fun and doing completely normal things and it becomes part of daily life. It’s not a fringe group.”