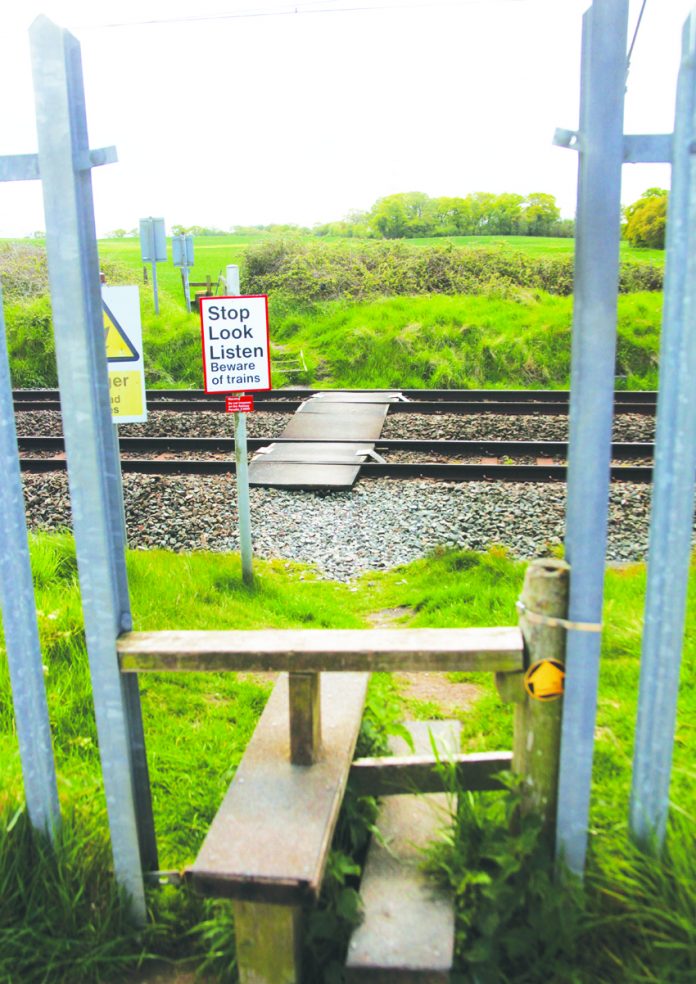 A footpath across the railway in Alsager could be closed permanently to improve safety.

Network Rail has launched a consultation about the possible closure of the crossing it calls “North of the Hall” near to Christopher Mitford Road.

As part of its assessment, the national body responsible for the country’s rail infrastructure wants to speak to crossing users and local people to understand the impact of any changes, with permanent closure being an option, to help improve safety for the public, train passengers and railway staff.

In 2016, Prospect Homes was given permission to build 128 properties south of Hall Drive, near the crossing.

While it did not object to the plans, Network Rail said in its official comment about the application that it would monitor the situation to see if the housing development led to increase use of the crossing and that it would “undertake the necessary measures to mitigate the increase in risk”.

Network Rail has invited locals to attend a virtual drop-in event on Thursday, 10th June, from 4pm to 7pm via Microsoft Teams where there will be an opportunity to ask questions and provide comments about the crossing’s future.

Anyone who would like to attend next month’s virtual drop in should email crnw@networkrail.co.uk (quoting North of the Hall crossing) and they will be allocated a time slot. Please provide a full name and contact details.

A Network rail spokesperson said: “We are at the consultation stage of this process and no firm decisions have been made to the future of the crossing.

“If you have any questions in the meantime, please do not hesitate to contact the National Helpline on 0345 711 4141.

Network Rail’s formal response to Prospect’s application for the housing development was: “Going forwards, Network Rail will monitor the situation regarding third party developments in the area around North of the Hall including the proposal for the 128 dwellings.

“Following monitoring of North of the Hall Level Crossing, if it is in fact determined that the proposal does impact upon the level crossing with a material increase in the type and volume of user then Network Rail would seek support from the local planning authority, the highways officer / team and the public rights of way officer / team to undertake the necessary measures required to mitigate the increase in risk.

In 2016, Network Rail urged parents in Alsager to warn their children about the risk of playing near or misusing level crossings.

Two images taken during November of that year at Brookhouse Farm footpath level crossing between Alsager and Radway Green, “clearly showed a group of children on the crossing using it incorrectly,” Network Rail said adding “this follows two incidents in October where children were reported playing ‘chicken’ and trespassing on the line at Alsager station”.

There were also near misses at Brookhouse Farm level crossing in June 2016 when three children were on the crossing and came close to being struck by a train on its approach to Alsager station.

The train speed along that section of track is 70mph and the risk to individual users of the crossing is ranked as “very high” by Network Rail.

Sixty-eight trains a day pass through the Brookhouse Farm level crossing, which is used 40 times a day by pedestrians or cyclists.