Song lyrics show how much has changed 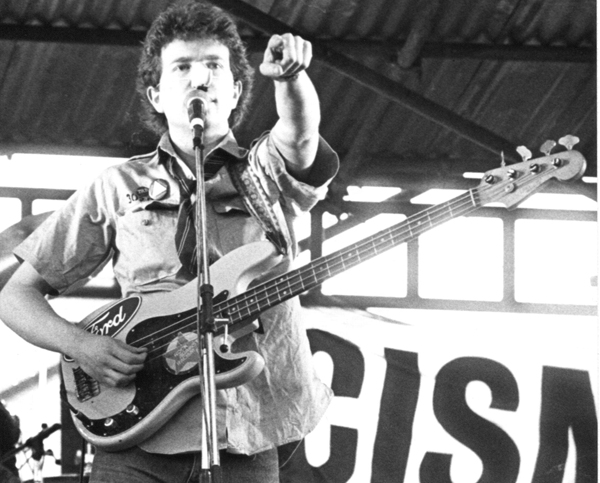 Social media occasionally flashes up someone complaining about police cars being decked out in the rainbow Pride colours, or officers dancing during Pride itself, harrumphing that the cops should rather be out chasing crims and saving money. The same people often simultaneously want more police walking the streets and not chasing crime.

Reviewing The Communards’ Red, rereleased for its 30th anniversary, recently, I thought of this (and controversial letters we get from Christians who [probably erroneously] read the bible as saying the God of love is anti-gay) and reflected on how much had changed. The Communards lyrics are about gay life back then (80s) and listening to it reminded me of Tom Robinson’s greatest recording, (Sing If You’re) Glad To Be Gay, from 1978, possibly the gay movement’s finest song, the lyrics of which show how much things have changed.

GtbG opens with: “The British Police are the best in the world / I don’t believe one of these stories I’ve heard / ‘Bout them raiding our pubs for no reason at all … Picking out people and knocking them down / Resisting arrest as they’re kicked on the ground.” Back then – the song was written by Robinson for a London Pride parade in 1976 – this was what happened. Robinson wasn’t making a point we didn’t all know: gay people could be beaten up not just by passing bigots but by serving police officers.

The lyrics are possibly more shocking today because we have moved on so far, despite the critical report of the police racism and misogyny published last week.

Anyone complaining about the dancing police and their rainbow cars might like to reflect on this change. There’s no chance a gay person – or any minority – would readily report a crime to a police force that would have people “resisting arrest as they’re kicked on the ground”, whereas today, whatever other failures they might have, the police (possibly the Met aside) are genuinely inclusive, and if it takes a car with a bright lick of paint and a few dancing coppers to stress this, it seems a small price to pay. Diversity is not just people who fancy the same sex either, it’s anyone who isn’t mainstream.

As for the rest of the song, the Albion it portrays has changed to varying degrees. A section about “Lie to your workmates, lie to your folks / Put down the queens, tell anti-queer jokes” probably doesn’t apply to many workforces today – although professional athletes might well sing them sincerely, too afraid to be honest in case it affects their career.

Another verse has fared better, pointing as it did to the hypocrisy of Gay News being prosecuted for obscenity while magazines such as Playboy or the The Sun were left alone. Today Page three has gone, Playboy is online only (circulation fell from 7m at its peak to 400k in 2017) and on telly there are programmes such as Queer as Folk and It’s A Sin.
The biggest change is the acceptance that there is simply a spectrum of human sexuality, and that people should be with whom they love.

Opponents to same sex marriage often seem curiously focused on the physical act of sex rather than the emotional content of any relationship, missing the whole point of two people getting together. One wonders if such people speculate in the same lurid detail about their heterosexual friends.

Talking to a retired CoE dean about this (he said nowhere did the bible prohibit same sex relations), I was pointed towards a Hansard debate in February 1994 when an attempt was made to reduce the age of consent for gay men from 21 to 16. The debate neatly encapsulates the issues.

Edwina Currie had tabled the amendment and noted that prejudice had no place in law, where all people should be treated equally.

“We have been accused of joining the forces of Satan,” she told Parliament. “Such views are held with passionate sincerity but the people who hold them are not entitled to insist that their prejudices be written into British law.

“In a free society the onus to prove that restricting freedom is in the nation’s interests is on those who would discriminate. That is impossible to prove. Equality is the only worthwhile and sustainable position,” she said.

Other MPs held more prejudiced views, focusing purely on the physical – Sir Nicholas Fairbairn (Perth and Kinross) was reprimanded for fixating rather too graphically on this, in terms we cannot print in a family newspaper. (Such protestations always remind me of Billy Shakespeare’s “the lady doth protest too much” and after he died, Sir Nicholas was accused of various sexual offences).

Tim Devlin (Stockton, South) compared being gay to child abuse (he was heckled, and Ms Currie ignored him) while Tony Marlow (who had two families, one for the week and the other for weekends) sniffily complained that Ms Currie was “seeking to persuade (us) to legalise the buggery of adolescent males”.

Bill Walker (Tayside, North) opined that it was “neither natural nor normal to carry out homosexual activity”, though he also seemed to approve of people below the age of consent having hetero sex, which rather leads one to question his intellect and logic.

John Butterfill suggested that older gay men would corrupt young people, Neil Kinnock telling him that this was poppycock (Mr Kinnock obviously used many, many more words).
Reading all this illustrates how society has changed and become more tolerant (Qatar aside, its World Cup ambassador saying this week that homosexuality is “damage in the mind”).
– something one would hope would survive this Government. A couple of weeks ago, I looked at how BNP policy had infiltrated the Tories and only days later, Suella Braverman plucked the “invasion” word right from the BNP manifesto.

She also engineered ill-feeling towards Albanians by allowing numbers at Manston to swell so she could claim “invasion”, then wrongfully implied the Manston issue was down to Albanians – in fact, most people in Manston are Syrian, Afghan, Iranian or Iraqi.