The journey is better than arriving 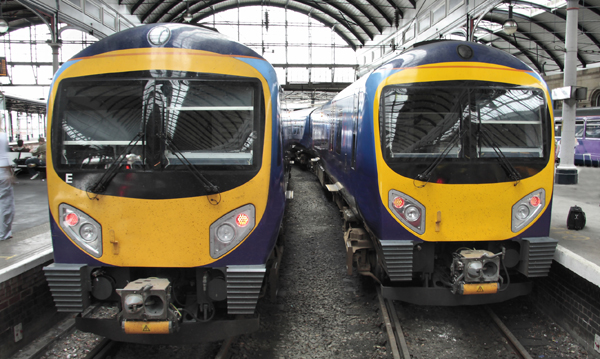 Politicians say they listen to the public (and take on board what they are told by constituents) but it’s hard to tell whether that’s the truth; probably not after I inadvertently carried out a small experiment over the weekend.

They say it’s better to travel than arrive, and this proved to be the case when I took a trip to London at the weekend, a rare incursion onto public transport (or out of the house, come to that).

The first encounter was more amusing than illuminating: arriving at Congleton Station at 7.15am, I discovered two lads who’d been up all night partying, either overly refreshed from the night before or possibly under the influence of something a little less legal than eight cans of Strongbow.

After five minutes of conversation that made no sense to either me or themselves (and several abortive attempts to find the corner shop on Cross Lane), the more sober lad, who was keen to get home and go to bed, said loudly, and very slowly to the other: “The train will come in. You will get on. The train will stop at Stoke. You will get off. You will walk home.”
The other lad looked at him blankly for a second, before asking: “Train?”

Arriving in Stoke (and resisting the urge to see if the lads made it home), there was a heavy police presence, because Port Vale and Stoke City were both away. There was no trouble on the station, just a mass of people, mainly men, a few looking like they’d been at the wrong end of one too many heavy sessions but all very peaceful.

Passengers quietly checked with the British Transport Police what train the fans were on; as one group boarded a train, they fired off a football chant very briefly – slightly alarming in a confined an out-of-context space of a train station.

On the train, I sat next to a professional violinist. Obviously, being British, we didn’t speak until we were nearly in London, whereupon we crammed in a full conversation for the last 15 minutes, both knowing it was time-limited by the arrival of the train.

She explained the damage Brexit had done to her career. She said her main work was with a Dutch orchestra, but thanks to Brexit she was reduced to one gig a year. She said the orchestra called and said it didn’t even realise she was British until they came to do the paperwork, but couldn’t employ her full-time any more.

I’ve heard people claim this was the case – a touring drummer was on LBC the other week saying he’d lost his job mid-tour and was now out of work. So I did know this was an issue, but it was interesting to hear from someone directly affected. She was obviously quite annoyed about it and is far from the only one, yet we hear little of this from elected representatives, who seem to toe the line that Brexit is all a big success. It’s almost as if, in this post-truth world, what actually happens has ceased to matter. You may have noticed that Nantwich-based family-owned cheese producer Joseph Heler has bought The Cheshire Cheese Company – the latter’s Simon Spurrell was in the news earlier this year complaining about the effect Brexit had had on the Macclesfield-based company.

Crossing London, I sat next to a nurse, who talked about how bad it was in hospitals, with beds full of people who should be in a home but had nowhere to go. She also complained about the lack of staff (a complaint echoed by someone else I later talked to, who said their mother had been in hospital and had been unable to eat her lunch or drink her water because of mobility issues, with not enough staff on duty to notice) and said that not only were people leaving the NHS because conditions were so bad and pay so poor but the previously available replacement nurses weren’t coming in because (she said) Brexit meant that any experience they gained in the UK was not recognised by their home authority.

The nurses who were coming in were from places such as the Philippines, working for agencies (so more expensive to the NHS) and sending their money back home.
It all seems a very unsatisfactory way to run a health service but instead of tackling what are clearly real issues, politicians talk in abstract terms about “protecting” the NHS; Rishi Sunak recently told ministers that the Government “would always support the NHS and that they would continue to be prioritised as difficult decisions are taken on spending,” which sounds good but doesn’t ease bed blocking or staff shortages.

It’s not just politicians. Back on the London train, I chatted to a Leeds fan travelling to watch his team. Most of the conversation was about the disparity between FA aspirations and the facts on the ground as far as junior football goes. The FA is all about fairness, diversity and kids playing for fun with their friends, but as anyone whose kids have played football will know, too many coaches and parents are more concerned with winning at all costs.

One visible sign of this is the abuse that some players and coaches heap on referees. Again, if you don’t have kids who play football you won’t know that games are refereed by teenagers learning the ropes, but despite them being only marginally older than the players, managers will abuse them, sometimes leaving young refs in tears, and leaving the FA with a problem recruiting refs.

My Leeds friend was a senior referee in his football area and said if we saw a ref being abused, we should complain to the coach responsible, and point out that verbally abusing a child – the ref – is against the FA child protection rules. (My new friend was a big, bald bloke with a certain amount of presence and possibly found that easier to do than some).

Again, the real world is a long way from the talk at head office. Like politicians waffling on about protection, the FA’s “creating safe venues, and building trust in reporting mechanisms and disciplinary processes for incidents of discrimination” is of no use to a parent hearing abuse on a pitch and not knowing what to do about it.