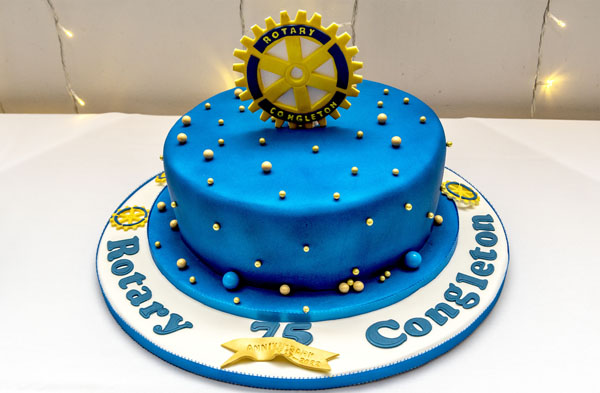 Seventy-five years to the day since it was formed, the Rotary Club of Congleton held its 75th charter night at Sandhole Farm Oak Barn, Congleton, on 21st November.

The anniversary of the day the club’s charter was granted by Rotary International saw 120 Rotarians, their partners and guests, the deputy mayor, and visitors from surrounding Rotary clubs and a large contingent from the town hall and Wincham Investments enjoy an evening of fine food and entertainment.

President Rtn Kevin Thompson wanted the theme of the evening to look forward and represent the talent of Congleton’s youth. Entertainment was provided by Congleton Youth Orchestra, whose string section played a selection of numbers to welcome guests on arrival.
Centre Stage Youth Theatre Company choreographed a song and dance routine to perform in the round. The performance included spirited numbers from West Side Story and Abba classics from Mama Mia. The routine was adapted from their recent stage success at the Daneside Theatre to fit the central dance area in Sandhole Barn.

Local magician and comedian Nick Barnes entertained with table magic throughout the evening and a final performance of amazing magic tricks with audience participation.
Rtn Sandra Conway read from the original framed charter of the club, signed when it was formed on 21st November 1947. 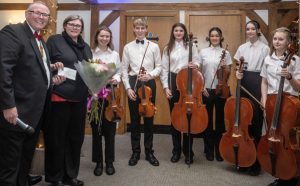 Rtn Thompson addressed the thorny problem of explaining what Rotary did. Rotarians are often asked but getting across the local, regional and international work of the organisation is always challenging, he said. His solution was to write a poem that covered every aspect of Rotary’s work, from its global polio campaign to educational work and including clean water and medical initiatives which it funds and delivers in the developing world.

Rotary’s assistant district governor Rtn Irene Russell gave fulsome praise for the club’s work in Congleton and listed all the events that make up Rotary Congleton’s full programme of community service including its public-facing events such as Swimathon and the highly successful bonfire and firework displays in the park.

The president acknowledged the work of Rtn Brian Hogan, who had organised the bonfire and fireworks displays over the last 10 years. Next year, Rtn Hogan will become club president and the work of organising the bonfire will be taken on by Rtn Eddie Roberts.
A special 75th charter cake was made by Matriarch Patisserie.