You can be Whatever You Want, ex Quo drummer tells pupils 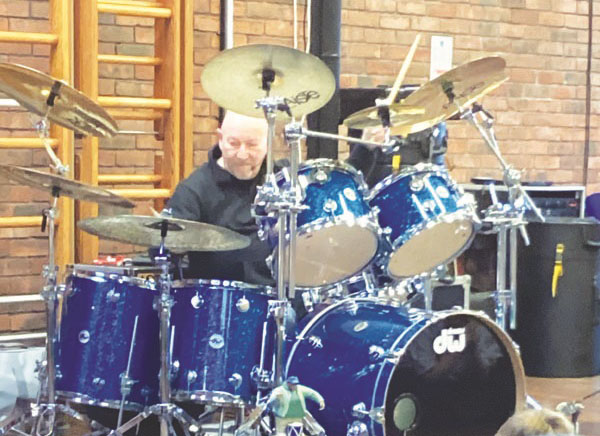 Former Status Quo drummer Jeff Rich recently met Alsager Highfield students to discuss his success as a drummer and to teach them some drumming techniques.

His success is more remarkable as he has never had a drum lesson, learning to play at home on a biscuit tin with his mum’s knitting needles.

The 69-year-old had many jobs as a youngster so that he could eventually buy his own drum kit. He told the children he practised every night after school from 4pm-6pm. This made them all feel rather sorry for his neighbours, especially as he grew up in a block of flats in Hackney!

During the afternoon, pupils participated in a practical workshop with Mr Rich, who shared with them an insight into his experience.

He joined Quo in 1985, replacing Pete Kircher on drums. In April 2000, he left Quo after 15 years, citing exhaustion and family commitments. He also helped out Def Leppard, and played alongside Rick Allen after he lost his left arm in a car accident in 1984.

Headteacher Rachel Woollam said: “It was an unforgettable experience for all involved and Jeff’s main message resonated with our own mission statement: Nurture, Believe and Achieve.”

Mr Rich now tours the country and in 2017 said he had given more than 6,500 masterclasses.