New choir is hoping to tune into carers’ needs 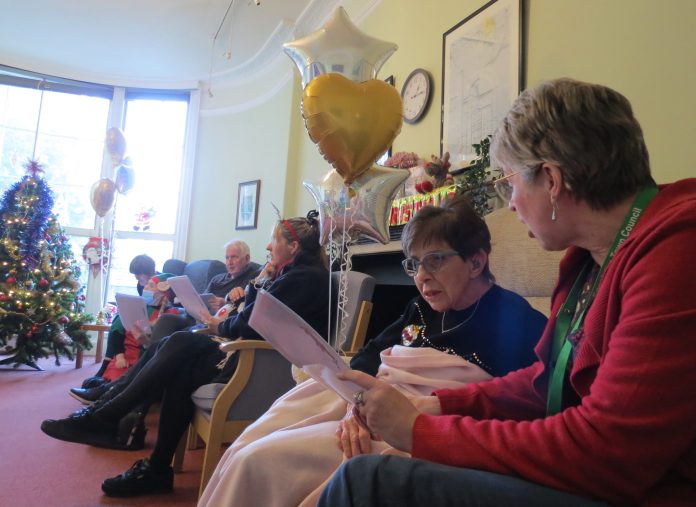 Local singers are coming together to “sprinkle a bit of glitter” in Congleton as part of a new choir for people in care and their carers.

The group, launched by charity Crossroads Together, held its first meeting in the run-up to Christmas and plans to meet monthly at Overton House, on West Street.

It follows the success of actress Vicki McClure’s dementia choir, which rose to prominence as it was featured on a BBC documentary that sought to demonstrate music’s power in combating dementia.

Maureen Williams is the lead care adviser at Crossroads Together, which supports unpaid carers in Cheshire and further afield.

She had been looking for a new way to engage the charity’s users, but knew that she would have to strike the balance between giving carers the respite they needed, while ensuring that cared-for people had somewhere they could be.

She said: “We wanted to start a carers’ choir, but we realised that it’s not always possible for carers to get the respite they need. That’s why it’s open to anyone involved with care in any way.

“It just brings a bit of happiness, doesn’t it? And people deserve that, especially after the difficult couple of years everyone has had. The choir is a way to come together and sprinkle a bit of glitter.”

At its launch prior to Christmas, singers were joined by the town mayor, Coun Margaret Gartside, as well as Coun Suzy Firkin.

There had formerly been a choir based at Overton House focused solely on people with dementia, but the funding dried up with the arrival of the pandemic. Now that restrictions have been lifted, the team of three care advisers at the charity decided to relaunch it with a wider remit and it welcomes anyone with any extra needs and their carers.

Mrs Williams continued: “All of us at Crossroads Together have experience of care in our personal lives. In order to do the job well, it helps. It’s what brought me to the role.” Her late mother, Ingeborg O’Leary, was diagnosed with dementia at the age of 84 in 2012. A tumultuous journey followed in which Mrs Williams learnt first-hand the heartache of dealing with a relative with a worsening illness and the vital service that carers provide.

Conditions such as dementia have been proven to respond well to music, which can help reduce anxiety, maintain speech and language, and can enhance quality of life. It has also been proven to have a connection with memory, which was explored in Line of Duty star Ms McClure’s Our Dementia Choir.

In the programme, a scientific study measured emotional and physical responses to singing over three months of regular sessions, culminating in a performance in front of an audience of 2,000.

As can be expected in the aftermath of a global pandemic, Crossroads Together is in constant need of funding.

Mrs Williams explained: “For us, it’s the difficulty of being refunded. We provide quite a niche service, but we always need funding to do these types of things. Covid has had a dramatic financial effect on charities like ours and they’re still struggling to recover, but we’re always thinking as a team about what’s missing and what issues our carers are facing, like loneliness and bereavement.

“When you’re a carer, it’s hard to say to a friend, I’m tired because I was up three times in the night. Unless you’ve been through it yourself, you don’t really understand the impact it can have long-term. So, we’ve found that carers love to get to know each other through projects like this one.”